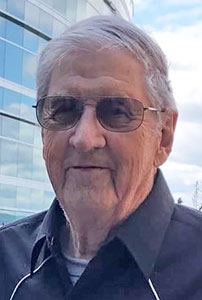 Conrad was born July 15, 1928, in rural Lanesboro, to Arnold and Cora (Glenna) Erickson.  He graduated from Lanesboro High School in 1947, and went to business college in Winona.  On October 15, 1950, he married Dorothy Seem; they were later divorced.  On April 5, 1958, he married Esther Simon in Winona.

Conrad farmed around the Highland area his entire life.  He also drove school bus for the Peterson School District for 14 years, had his pilot’s license and flew his own plane.  Conrad loved to collect and restore Oliver tractors and spent hours outdoors working on his collection after he retired from farming.  He loved having coffee with company and going out to dinner with family and friends. Conrad’s jokes, stories and desire to have a good time will truly be missed.

Funeral services for Conrad will be 2 p.m. on Friday,  April 30, 2021, at First Lutheran Church of Highland, rural Lanesboro, with Pastor Patricia A Hinkie officiating.  Visitation will be one hour before services at the church.  Burial will be in the church cemetery.

Online condolence are welcome at rileyfuneralhomes.com.