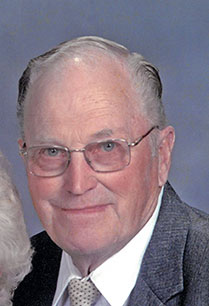 On the eve of Independance Day, Saturday, July 3, 2021, Clifford Reginold Thompson, Sr., 90, of Lewiston, Minn., passed away peacefully on the family farm surrounded by his loving family. He was born on April 11, 1931, on Vinegar Hill, Rushford, Minn., to Carl and Emma Thompson. He was united in marriage with Mathilda Hoch, during a candlelight service, on June 4, 1952, in Winona, Minn.

During his lifetime, Clifford was a plasterer and farmer, and a member of the Lewiston American Legion Post 90 for 60 years. He will be remembered for his love of his late wife Mathilda, six children, 22 grandchildren, and 38 great-grandchildren. He also enjoyed auctions, collecting John Deere tractors, traveling with Mathilda, and sharing his lifetime experiences through his soft-spoken stories.

He is also survived by his sister Lillian Reps.

Preceded in death by his wife Mathilda, brothers Olaf, Alfred “Henry,” Carl, Martin, Orlin and Harold; sisters Evelyn and Madeline, and his parents.

Please share a memory of Clifford with his family and friends at www.hofffuneral.com. Hoff Funeral Service of Lewiston is assisting the family with services.