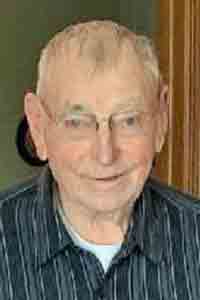 Cleon Heusinkveld, age 95, of Spring Valley, died on April 23, 2021, at his home. Cleon was born January 1, 1926, in Forestville Township to Reuben and Jessie (ScheeveI) Heusinkveld. He attended Stone Country School and Wykoff High School until his brother left for military service. On August 30, 1949, he married La Vonne (Bonnie) Graling and moved to her  family farm and continued  his dairy farming career. To this union, two sons were born, Steve and Jeffrey. Along with farming, Cleon sold seed for 50 years, part of that time also managing seed dealers. As he enjoyed being a salesman, he also sold Sentry Pacs (programmed aeration controllers) for grain bins for many years.

He was a lifelong member of the Greenleafton Reformed Church, where he served as both a deacon and elder. He also taught Sunday School and was active in the Men’s Brotherhood.

Cleon was also very community minded. He was active in the Farm Bureau in his township and also in the county, serving as president and also as county membership chairman. He served on the FHA Board as well. Also, he and his wife were local 4-H Leaders for years.

He was also an avid bowler and loved to go fishing. He also considered mowing hay for the farm a hobby.

He dearly loved watching his grandchildren and great-grandchildren participate in sports, music concerts and whatever his grandkids were doing.

In his younger years, he enjoyed playing softball and was instrumental in organizing the State Line Men’s Softball League.

Funeral services for Cleon will be held at 11 a.m. on Saturday, May 1, 2021, at Greenleafton Reformed Church in Greenleafton, Minn., with Pastor Roger Lokker officiating. Visitation will be held from 4-7 p.m. on Friday, April 30 at the church. Burial will take place at Cherry Grove Cemetery. Masks are required and social distancing will be practiced.