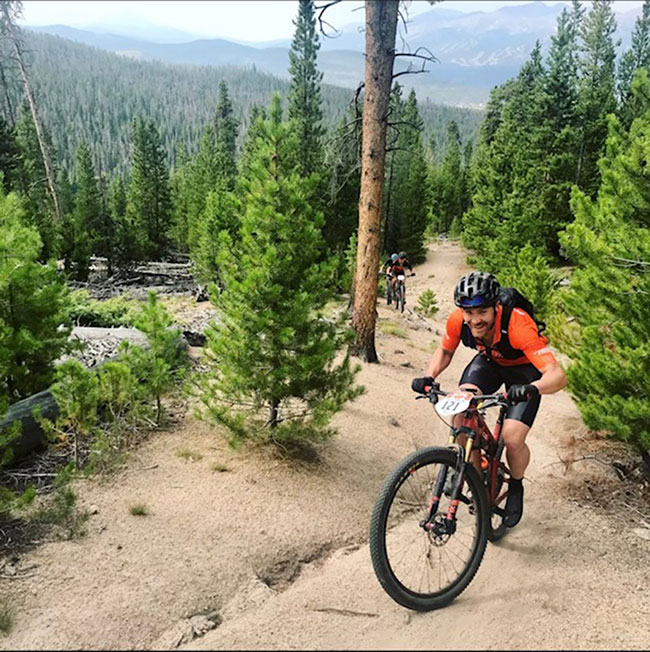 Fillmore County native Jarad Christianson likes to ride his bicycle. A lot. And he’s gotten quite good at it. As proof, he recently placed first in the 30 and older age group at the highly competitive Breck Epic mountain bike trail race, in Breckenridge, Colo. Jarad recently sat for an interview about the experience.

When asked to describe the Breck Epic, Jarad explained that the race took place over six consecutive days, between August 15-21, with a specific “stage” being ridden each day (much like the Tour de France). But the Breck Epic differs greatly from the Tour in that it totals about 240 miles, with 40,000 feet of vertical climb. And as Jarad added, “Most of that is above 10,000 feet here in Breckenridge, so it’s a high alpine race for the most part, low oxygen.”

Jarad said his love of athletic competition came from his days on the track in high school. “The experiences I had back in Fillmore County… on the track or any kind of sports… lessons I learned from the coaches on the Lanesboro/Fillmore Central track team kind of stuck in my head.” Jarad said in high school he competed in middle distance races (800 meters and 1600 meters) as well as the triple jump. He said the 800 meters, in particular, demands that a competitive runner knows exactly how hard to push during the race. “That’s how mountain biking is too,” Jarad added, “The 800 got me familiar with that mindset where you’re pushing just under your limit.”

To illustrate the physical demands of the six-day event, Jarad stated, “So for 20-some hours, my average heart rate was probably 155 or 160 over six days. By the fourth day, I was waking up wondering why am I doing this. So it’s not only competing against the other people, but it’s really against yourself… overcoming that and just working through it.”

In describing how he ended up in Colorado, Jarad said that after high school, he went to college at CU Boulder, then moved back to the Midwest for a few years. But he said he was drawn back to the Rocky Mountains, and ended up in Breckenridge, as several of his college friends were there. Due to a running injury, Jarad could no longer run the way he did in school, so he started biking, and eventually mountain bike racing.

Jarad said he’s been competing in mountain bike trail races for the past four years, and the training required is quite a time commitment. He stated, “To get to that level of being on the podium or being competitive like that, it took me five to six months of solid training to get to a level where I could race and go to race pace six days in a row… It’s a big commitment. You have to put in 16 to 20 hours a week of training to be competitive.”

According to Jarad, the support of his family, girlfriend, workplace, and sponsor are essential in his pursuit of competitive bike racing. Jarad’s mother, Tami Christianson, was at the Breck Epic, and volunteered to staff one of the aid stations along the trail on each day of the race. Jarad’s main sponsor is a local bike shop, Avalanche Sports. He said he’s very grateful for the equipment and mechanical help his sponsor provides, to keep him in the saddle on a well-tuned bike at all times.

Luck has been on Jarad’s side during his four years of racing. He said, “Knock on wood, I’ve never had a flat tire during a race. But two years ago, I had my shifter completely detach from my handlebars, so I kind of had a single speed bike for 20-some miles of the day.” Jarad reported that he has avoided major crashes so far, as well. Crashes are always a concern, though, especially on the narrow trails. “Typically, we’ll have fire road sections… and then the majority of the race every day, I’d say 90%, is on single track which is just wide enough for your bike’s handlebars, really.”

The 2021 Breck Epic had between 450 and 500 riders total, in all of the categories. Jarad said typically, about half of the competitors are from outside the USA. He said the remote location and physical demands create a unique bond among the riders. “We’re all doing this unnecessarily painful thing to ourselves. And so once we’re done every day, it’s this nice camaraderie.”

When asked if he’s had significant encounters with wildlife, Jarad replied, “Not during races, but there have been plenty of time when I’m flying down a hill, and there’ll be, like, three moose on the trail, and you’ve just got to get away as fast as you can.” During the fifth stage of this year’s Breck Epic, Mother Nature intervened. Jarad explained, “Day five, we had to ascend to almost 13,000 feet up and over what’s called the Wheeler Pass. And the weather turned really horrible about 30 minutes in. So we were up there in the clouds. There were points when I couldn’t see more than 10 feet in front of me. And it was raining and sleeting and snowing. It was pretty scary.”

Jarad also told of some unique and humorous factors to this year’s Breck Epic. He stated, “On Day 4 of the race, there was a random man with dozens of Fireball Whiskey shots lined up on a tree stump, telling us to take one. I didn’t think it was in my best interest, but it was quite funny because he was in the middle of nowhere. Another day, someone was cooking bacon on a camp stove and handing it out at about 12,000 feet above sea level.” Elsewhere along the trail, Skittles candy and cans of beer were also set up for riders to partake if they chose.

Looking to the future, Jarad plans to continue training and racing. If possible, he’d like to gain more sponsorships and ride at the more competitive pro level. Jarad’s overall time for the six-day event was 20 hours and 32 minutes. This put him over an hour ahead of his nearest competitor in the 30+ age group. Jarad got to wear the “leader’s jersey” throughout the race, and ended up padding his lead by over 10 minutes on the final day’s ride. For his victory, Jarad received a plaque and a special jersey. But he said his favorite “prize” was simply the recognition of winning and achieving his goal.