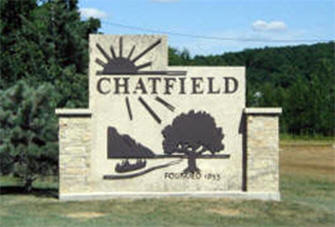 At the July 25 meeting of the Chatfield City Council, a resolution was unanimously approved to continue the current method of waste and recycling collection for at least another year. Bill Hanson, William Hanson Waste Removal, agreed now is not a good time to make a switch.

The Public Services committee needs more time to resolve the many issues that have popped up over the past months while considering a switch to a cart system. Councilor Dave Frank said there has been a lot of discussion; maintaining the system as it is for a year will provide time to resolve these issues. After about a year, the Public Services committee will present its findings to the city council for review.

Councilor Paul Novotny expects that the city will eventually go to a cart system. Councilor Josh Broadwater suggested that when the community expected a movement to carts, people spoke up who favored bags and those that favored carts didn’t see a need to.

A resolution was approved to increase the selling price of bags, which has not been adjusted since 2017.

The city attorney was authorized to draft an amendment to adjust fees associated with the city’s waste and recycling collection. As costs have increased significantly for the hauler since the contract was adjusted in 2017, an amendment to the city’s ordinance and hauler agreement will increase the base fee charged to residents and paid to the hauler by $2.00 per month per residence.

Lastly, a resolution was adopted to authorize the city attorney to develop an amendment to the city ordinance to classify apartment and mixed-use buildings as commercial; this will give owners of the buildings the option to use either the bag system or to contract directly with the hauler for a dumpster.

Rocky Burnett recommended approval of two new EMTs. Both Adam Taylor and Sarah Castleberg were added to the roster of EMTs; both are already nationally registered EMTs. The service now has a roster of 22 EMTs.

• Councilor Pam Bluhm had asked City Clerk Joel Young if it would be possible to make a slight change to the most recent proposal to create the city administer position and to resubmit is to the city council for its consideration. Because of the time that has passed since a motion was made and voted on for a city manager/administrator, the process needs to start over. A resolution was approved unanimously requesting that the City Charter Commission submit a new proposal for consideration. It was requested that the proposal from the Charter Commission be identical to the recent proposal, striking out the word “manager” wherever it might have appeared.

• The hire of Richard Evans as a part-time police officer was approved as recommended by Police Chief Shane Fox.

• Approval was given for Widseth to prepare a feasibility report for a possible 2023 Street Project (Grand St. SE, Hawley St. SE, and Prospect St. SE). The report will provide current cost estimates for the improvements and define the scope of work. The services are estimated to cost $6,400.

• Steve Schlichter, WWTF superintendent, explained the options for needed roof repair on sections B and C at the wastewater treatment facility. The roof is 25 years old and there have been leaks on these sections for the past two years. A quote from Allen Roofing for a new roof on the two sections at an estimated cost of $28,995 was approved. The work is expected to be completed this fall.

• A resolution to accept a donation in the amount of $20,000 from the Chatfield Firefighters Activities Association was approved.

• Approval was given for a resident’s no-fault sewer back-up payment in the amount of $6,000.

• Brian Mueller and Bill Pirkl each introduced themselves as candidates for Olmsted County district 4 commissioner. The primary election for the position will be held on August 9.

• The next meeting of the city council is scheduled for August 8.