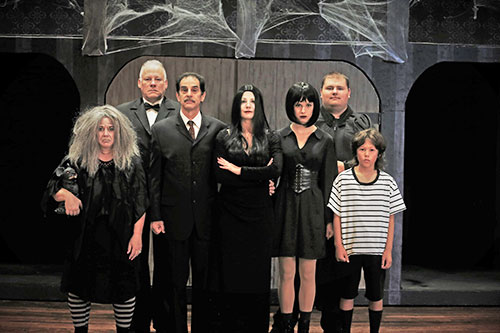 Wits’ End Theatre is excited to present The Addams Family, A New Musical Comedy. Not only is this Wits’ End’s 17th annual musical, it is the 50th year of Western Days musicals in Chatfield! The first Western Days Musical Production in 1971 was inspired by The Parnell’s variety show that was a part of the 1970 Western Days festivities. Effie (Laird) Parnell was born in Chatfield in 1888. This original variety show included “musical selection and character sketches.” The playbill for the two performances noted “The Parnell program is very flexible and other numbers will be added.” While future Western Days and Wits’ End productions may not have been able to add musical numbers and skits as needed, any community theater member understands the need for flexibility!

The 2021 production brings to life that all too mysterious, kooky, and spooky family, the Addams. The Addams Family first came to life as a comic in 1938, created by Charles Addams. Since then it has become a cultural touchstone. Beyond the original comic has been adapted into tv shows, movies, animated series, video games, books, a musical, and an upcoming Netflix series. In musical form The Addams Family embraces the wackiness in every family and centers on every father’s nightmare: Wednesday Addams, the ultimate princess of darkness, has grown up and fallen in love with a sweet, smart young man from a respectable family – a man her parents have never met. And if that wasn’t upsetting enough, Wednesday confides in her father and begs him not to tell her mother. Now, Gomez Addams must do something he’s never done before – keep a secret from his beloved wife Morticia. Everything will change for the whole family on the fateful night they host a dinner for Wednesday’s “normal” boyfriend and his parents.

The cast of 20 has been working hard since mid-June to learn blocking, choreography, and music to bring this show to life. Cast members include Wits’ End regulars along with some new faces. Kathy Keech returns to direct, with Robyn Lowen as musical director.  However, theatre productions don’t have that “Itt” factor without all the “hands’’ behind the scenes that help put together the show. No show could go on without ushers, painters, costumers, and stage hands. To show our appreciation of 50 years of each night our curtain will be opened by an ancestor of Chatfield’s community theater past.

Information on show dates can be found at witsendtheatre.org. Tickets can be purchased online or at the Chatfield Center for the Arts box office (507) 884-7676.