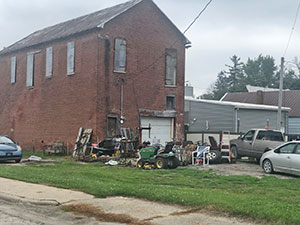 The Canton City Council hosted a town hall meeting on Wednesday, July 14, to gather input from residents about the city’s nuisance ordinance and how the city has been dealing with those who are not in compliance with the ordinance.

The town hall meeting began with a presentation by the city about nuisance ordinances. A public nuisance is defined as being a “condition which unreasonably annoys, injures or endangers the safety, health, morals, comfort or repose of any considerable number of members of the public.”

The ordinances are enforced through public education – on social media and through city newsletters, annual property inspections and legal action.

When the city conducts a property inspection, Clerk Brock Bergey and a deputy from the sheriff’s department do a drive by evaluation and document any violations they may see. The property owners are informed by letter, asking them to bring their property into compliance by a certain date. This year, that date is August 6.

Bergey also noted repeatedly through the meeting that the goal of the city is to have everyone voluntarily comply with the ordinances. The letter is meant to inform property owners of any issues observed by the deputy and himself during the inspections.

Over the past several years – only five property owners were actually cited for ordinance violations – three in 2020, one in 2019, and one in 2018.

Punishment for a public nuisance ordinance violation, following conviction of a misdemeanor offense, is “not more than 90 days in jail or a fine of not more than $1,000, or both.” However, past violators who were convicted of that misdemeanor were sentenced to probation and received a $50 fine.

Several individuals who had received letters from the city, advising them of issues that were observed during a drive-by property inspection in June, were present to address their issues and the city.

Also attending were residents who have been following the city’s efforts to remedy several nuisance properties, spanning decades in some instances.

First to speak was Robroy Kelly, owner of a property just south of the town hall in Canton. He received a letter from the city that outlined several issues, including excessive weeds and debris.

“It might behoove you to go look at my ‘weeds,’” he told the council, claiming he was growing hollyhocks, milk weed and other plants to encourage butterfly growth. He also claimed the pile of dirt on his property was a “raised garden bed” that had been there for three years.

Kelly stated that if it hadn’t been for COVID-19, he would have fought the city’s last case against him by “taking it all the way to a jury trial.”

Bergey reminded Kelly and the others present that voluntary compliance is always the goal and the letters only outline concerns observed during the June property inspection. No citations are issued until after an August 6 deadline to come into compliance.

Property owner Jim Richardson attended the meeting because he also had received a letter stating he had too many weeds on his property. He said the weeds were located in a flower bed and wanted the city to define questions like “What is a weed?” “What is too many weeds?” or “How high is too high?”

Richardson added, “How picky are you going to get?”

He also admitted that he was upset he got a letter when so many other places in town also have a lot of weeds.

City Attorney Greg Schieber noted that the ordinance does outline how tall one’s grass can get and what weeds are considered to be “noxious,” which would include thistles and wild parsnips. Regardless of the type of plant or weed, a photo was shown of the Richardson property with a large portion of lawn being overgrown.

“I think you’re getting too heavy with this stuff,” Richardson said. “Some of the city property has weeds and garbage on it – does that need to be cleaned up?”

Jon Nordsving from the city’s Public Works department, quickly interjected, “We’ve been told, we just haven’t gotten to it. We’ll get it cleaned up.”

The discussion moved from specific property owners to the consequences one may face if in violation of the nuisance ordinance. County attorney Brett Corson was at the meeting to discuss the city’s options when dealing with nuisance properties and what the city may hope to get in return.

“It is going to take a number of times (offenses) before the judge would put anyone in jail,” Corson said. “Even a big fine may not be the answer as you just want them to comply.”

Corson added, ultimately, the city wants to see a property owner’s money used to fix up property instead of going to pay a fine.

“The $50 fine is insignificant,” said Richardson.

Corson agreed, but also added that many of the outcomes are based on each individual case. “It has to be an individual answer,” he said.

He also explained, in some cases, property owners may be unable to bring their property into compliance or fix issues –whether they be too expensive or the individual may not be physically able to remedy the issue.

Richardson also voiced his opinion about having a deputy ride along with the clerk to do the inspection – saying it was “intimidating.”

Sheriff John DeGeorge was also present and interjected that most towns who contract with the county for law enforcement do have a deputy ride with the clerk during these inspections. Not only does it provide a “second opinion” and helps negate individual bias, but the deputy is also a first-hand observer to what the ordinance violation may be.

“If we are going to issue a citation, we have to be involved from the beginning,” DeGeorge said.

Bergey also noted that the city notifies all the property owners at least two weeks before the property inspections so the residents can address any issues they see that may be out of compliance with the ordinances. “The goal here is always voluntary compliance,” he said again.

As the concerns of people were addressed, Councilman Randy Gossman asked, “As city people, what do you think? Do we keep dumping money into this thing?”

Specifically, Gossman was asking if the citizens of Canton wanted the city to keep issuing citations and fighting property owner Danny Whalen to bring his property into compliance. Whalen’s property has been a source of contention for over two decades, with several city council members noting his property was a concern when they first came on the council and it is still a problem area within the city.

Whalen was convicted of a misdemeanor, fined $50 and placed on one-year of probation. As soon as that year of probation expired, city staff and residents observed him moving junk back onto his property, hauling more cars in with other concerns emerging.

Resident Kristy Ziegler asked, “Is it a residence or a business?” to which the council had no definite answer as it seems to currently serve as both. She was also concerned about the chemicals in the soil as Whalen operated a car repair business there and seems to continue working on cars in the back part of his lot.

The city could simply issue another citation to Whalen for nuisance ordinance violations, however, the concern is the city is spending more money on a never-ending and never-improving cycle.

Corson told the council and residents that the city could approach this in two ways – one is to continue to pursue it with a criminal case and the other is to approach it as a civil case.

In a criminal case, the city has to prove guilt beyond a reasonable doubt. The defendant gets a public defender, there is no filing fee and the accused has the right to remain silent and the access to the property is limited.

In a civil case, the accused does not get a court-appointed attorney, there is a $300 filing fee for the city, but the prosecutor can depose the defendant with a court reporter creating a transcript. The city could get a permanent injunction for the property and could get lawyer and court fees as restitution if the individual is proven guilty.

“So we basically have three options,” said resident Donivee Johnson. “We put up with it and ignore it or we can file a criminal case or a civil case.”

Schieber also pointed out the city has to be prepared – if filing a civil case – to go to the end of the road. “You may win the privilege of cleaning it up,” he said.

If the cleanup and/or renovation is too expensive and the property owner would never be able to recover the costs associated with that action, they could walk away and the matter would be left in city hands.

Likewise, if the city should get a condemnation order for one of the properties, the outcome would also be that the city would be responsible for boarding it up and disposing of it.

“It’s going to cost us money, one way or another,” Johnson added.

“That’s why I suggested this meeting,” said Gossman. “We wanted to hear from the residents if they continue to support us throwing money at this thing.”

When Bergey asked if residents wanted the city to continue to do annual inspections, a few in the chambers responded with an adamant, “Yes.” Richardson, who earlier had voiced concern over the process, added a “Yes, but maybe not be so picky.”

Community pride is what the city is focused on now, Bergey said. “We want people to move here. We want businesses to establish themselves here.

Councilman Carl Ernst agreed and stressed that residents can help promote that community pride by talking to their neighbors and friends and encouraging each other to keep the properties orderly.