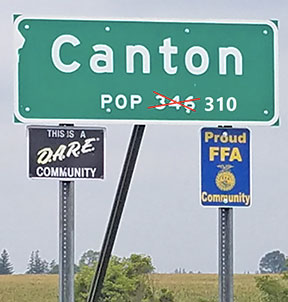 As the Canton City Council met on September 8, the 2020 census results came up several times during regular business discussions. According to the latest census, Canton has seen a decrease in population by 34 residents over the past decade, going from 346 to 310. Clerk Brock Bergey said this 10.4% decrease is the sharpest decline in population since the 1970 census, when the city of Canton saw a 16.2% reduction, going from 467 to 391 residents.

Because a lot of the city’s funding is based on per capita formulas, this drop in residents will affect the city’s revenues, specifically local government aid.

On the flip side, however, memberships or fees based on per capita will be decreased as well, saving the city some money. As an example, as the city approved payment of dues to the League of Minnesota Cities, Bergey noted the city was seeing a $20 savings because of the population decline, even though the League had increased the cost of the dues.

Bergey cautioned the city council members that the city needs to look at the overall trend and ask themselves why this may be happening. The city may want to look at ways to increase and promote reasons why Canton may be an attractive place to live.

The council reviewed and discussed the preliminary budget and tax levy for 2022. He is proposing a 5.5% increase to the tax levy, which is used for general fund expenses.

Bergey outlined factors which contributed to this proposal, which the council can lower, but cannot raise, before the final levy is set in December.

The general fund budget for 2022 does not include any increases for employee wages.

PERA and FICA amounts have been reduced with proportionate allocations now being budgeted in water and sewer funds (benefit of Banyan software). Before, these items were taken completely from the general fund even though staff wages are divided out and expensed to several funds depending on duties.

Bergey noted a slight increase in worker’s compensation insurance based on 2021 premiums; however, general liability insurance premiums were reduced after a review of coverage.

Office supply expenses were reduced due to one-time purchases in 2021 to create a deputy clerk station.

Operating supplies increased by $3,000 due to rising fuel and other costs.

Professional services were increased to $18,000 due to increased costs and unexpected legal fees that incurred due to enforcement of city ordinances.

Funds for repairs and maintenance construction were significantly reduced with no major facility or street improvements planned. Bergey did note $5,000 has been budgeted for streets maintenance (gravel, patch, etc.).

Capital outlay budget numbers were increased to $65,000 to account for investments in heavy machinery, which would include a replacement backhoe and the trade-in of the lawn mower.

There was also a slight reduction in fire protection and ambulance services due to change in population.

Bergey told the council the 5.5% increase would generate an additional $8,754 in revenue for the city. Local Government Aid, which was based on the previous population numbers of 346, will increase 1.2% to generate an additional $1,138. He also expects the city to see an increase in town hall rentals in 2022, which has seen a decrease in recent years due to COVID-19 restrictions.

The council approved the proposed budget and set the preliminary tax levy.

In other business, Bergey noted, in his clerk’s report, that he and Public Works Director John Nordsving have been working on gathering information to pass along to the city engineers for work on developing a preliminary engineering report for the proposed street and utility improvement plans. The checklist, he added, needs to be completed by September 15, which is proving to be a challenge as some of the items requested by the engineers is either missing or has not been done in the past several years. The cost of the engineering report is about $40,000, he said, but also noted he learned the ARPA (American Rescue Plan Act) funds the city will receive can used to cover those costs.

Also noted in his report, Bergey told the council Plant Lady Landscapes had donated plants to the city for the green space by city hall. Other donations by the Ramlo and Kerns families have made the space quite attractive.

The city is still in search of an animal control officer following the resignation of Carl Ernst from that position. Bergey said the position has been advertised, but he has received no solid leads for filling the job. Ernst did say that some residents had taken some of the feral cats out of town to area farms, but also added the city will have more coming into town as it gets closer to winter. Without an animal control officer, Councilman Randy Gossman said, “Our hands are tied with what we can do.”

In unfinished business, the council briefly discussed any progress made on the former bus shed. Nordsving and Gossman reported much had been delayed until after the city’s Canton Day Off celebration. Now, Nordsving added, it will likely be a fall project when staff have fewer mowing and groundwork projects to complete.

The city will be applying for an Arlin Falck Foundation grant, with the application due by October 2. The council members discussed possible projects, but ultimately agreed to apply for funds to improve accessibility at the town hall. This would include adding new doors and building a ramp to the back door.

The council approved the renewal of the Mediacom franchise agreement for cable services in town.

In a similar topic, the council discussed creating an agreement with LTD Broadband, a company that has equipment for internet service on the city water tower. Bergey noted that neither he nor the company could find any record of a written agreement, but understood the city had allowed the company to put the equipment on the water tower in exchange for free internet for the city buildings. However, Bergey noted, the service proved to be unreliable, so the city opted to pay for internet through AcenTek. The LTD Broadband is used at the wastewater treatment plant, Bergey added.

Bergey noted the city could charge LTD Broadband a hosting fee of $600 annually and pay to add the wastewater treatment plant to the AcenTek service, which would cost just a bit more than the city would receive from the hosting fee.

Council member Cindy Shanks suggested creating a written agreement with the current arrangement detailed for review and approval in October.