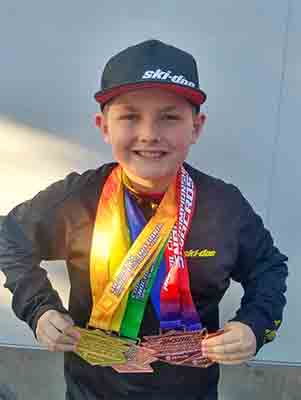 Middle-schooler Brody Srsen, from rural Harmony, is already an experienced and successful racer in his own right. Brody has been racing since he was five years old. His dad Ryan, mom Sarah, and his uncle got him started on ice racing with a four-wheeler using ice cleats to grab the ice on the track.

Currently he races his dirt bike locally at Spring Creek in Millville, Minn.; he also races his snowmobile at national competitions at Elk River, Eagle River, Michigan, and more. Before last year he raced four-wheelers nationally as far away as Texas.

He considers one of his biggest successes to be winning a national final in 2019 in Iowa; Brody had led heat one and two before leading all the way in the national race and winning the final.

When asked why he liked racing, Brody responded that he likes hanging out with his friends and cousins who also race dirt bikes. Most importantly, he loves the adrenaline rush of sitting on the line and waiting for the gate to drop.

After every race, he and his dad wash the machine, go though it and check for any problems, and change oil. Brody’s dad does all the necessary mechanical work.

Brody encourages others to join him in racing, “It’d be awesome for all my school friends to do it — it’s great to be outside and be active!”

Brody acknowledges that there are times when he gets scared. When there are a whole line of people, he wonders what’s going to happen on the first corner.

To Brody, the most exciting things about racing are hitting the jumps and going over the rollers. Sometimes he’s 10-20 feet in the air. “You’re in the air; you might look at it wrong, or stiffen up, which can cause injuries.”

Injuries do happen; Brody has trouble with his knees sometimes, and last year he fractured his wrist on his dirt bike.

The racers wear assorted safety equipment such as chest protectors, knee braces, goggles, boots, helmets, and neck braces. While he thinks most people consider the neck braces to be most important, he himself thinks the knee braces are most important since he’s had previous knee problems.

When Brody races, there are at least 40 other kids in the races; three or four heats of 9-10 kids are held with a total of 15 going on to the final race.

Kids are separated into groups according to their ages such as 9- to 13-year-olds. Points are allocated throughout the season based on finishing place, and a big banquet is held at the end of the year acknowledging the winners.

Brody is well aware that he is lucky to have parents who support him in racing. In fact, when asked if he had any brothers or sisters, he replied, “No, thank goodness! I wouldn’t have all these cool things if I had brothers and sisters!”

In addition to his parents, Brody has business sponsors who also support him as he races his Ski-Doo snowmobile and his Husqvarna dirt bike. His sponsors include: K&M Coating, Mikado, Preston Equipment, JMS Ag, Doug Schultz Shocks and Suspensions, Kelly Printing, and DK Designs.

Brody is currently a sixth grader at Fillmore Central whose favorite class is math. In the summer he enjoys football, driving his RC trucks, and surfing with his friends. He already has his own mowing business with several jobs lined up so he can earn his own money.

In the future, Brody wants to go to college and get a “really good job” so he can continue to have all his cool machines and give his kids cool stuff as well.

Brody is a motivated young man who appreciates all the opportunities he has had and is willing to work hard for things he wants. Something tells me, we’ll hear about more of Brody’s successes as he grows up!