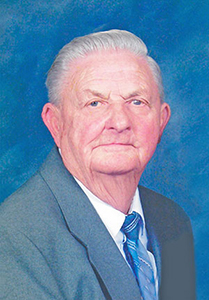 Blaine was born January 23, 1928, in Mabel to Emil and Blanche (Lee) Gaare.  He attended Mabel Schools.  He was a farm worker before entering military service for a short time at the end of World War II.  He would later re-enter the Air Force in September, 1950, and was stationed in the Philippines as a radio operator during the Korean Conflict.  After his discharge he returned to Mabel, where he worked for Curt Wennes Trucking and later the North Star Gas Station.  On January 23, 1961 he married Helen Rouster in New Albin, Iowa.

As a young man Blaine enjoyed riding horses, and later watching baseball, listening to Big Band music, socializing over a cup of coffee, and going for drives.

He was preceded in death by his parents, a brother, Roger Gaare; a sister, Barbara Spalding; and a stepdaughter, Susan Brynsaas.