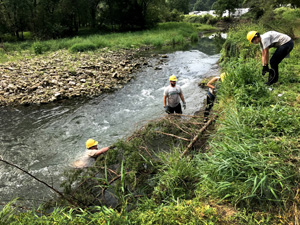 BLACK HAMMER  TOWNSHIP — A trout stream bank stabilization project that started as an experiment on a Root River tributary has become a tested conservation practice in Houston County’s bluff country.

This summer, for the sixth consecutive season, a Conservation Corps Minnesota & Iowa crew will harvest invasive cedar trees from nearby bluffs, and then anchor them to eroding streambanks. Root River Soil & Water Conservation District staff oversees the work, designed to fit small streams high in the watershed where the banks are less than seven feet tall.

Both stream and bluff habitats benefit. The SWCD gains a labor force. The CCMI crew, whose membership changes each season, gains job experience.

“If it wasn’t the Conservation Corps doing it, I don’t know that we would get this kind of work done,” said Bob Scanlan, Root River SWCD assistant manager.

The Minnesota Board of Water and Soil Resources’ annual appropriation of $500,000 in Clean Water Funds pays for CCMI crews’ labor costs. Local government units submit applications for work projects, and often provide matching funds. A $20,000 grant from the Minnesota Corn Growers Association covered the cost of materials for the Root River SWCD project.

This year in Minnesota, about 500 CCMI crew members — including 300 AmeriCorps crew members ages 18 to 25 — are slated to work with about 50 agencies on 150 conservation projects.

The Root River SWCD assignment is among the most coveted in the state.

Since 2014, CCMI crews have worked on segments of Riceford Creek totaling about two miles — about half on cedar revetment, half on boxelder removal and related work.

It’s slow, difficult manual labor that requires chain saws and chest waders. It’s the sort of job that tends not to attract contractors.

Reducing how much sediment and phosphorus enters the stream is good for cold-and-clean-water-loving trout. Cutting cedars helps to restore the steep, dry goat prairies, unique habitats of the Mississippi River Valley’s driftless region. Removing box elders where they shade the streambanks allows stabilizing grasses and plants to grow in those erosion-prone stretches.

In mid-August a Rochester-based CCMI crew dragged cut cedars to the stream, where they secured the trees snug against a 500-foot stretch of bank. Using mauls, crew members drove each duckbill anchor three or four feet into the bank, tightened the attached cable, wrapped it around the trunk and crimped it — while standing waist- to chest-deep in rushing water.

Previously, landowner Walt Nigon, 67, had cut and hauled the cedars from his bluff across the stream. Walt, a retired Rochester area tool and die machinist, and his wife Barb, president of the nonprofit prairie restoration group Prairie Smoke, bought the 29-acre weekend getaway property in 1999.

“It’s a driftless area, so we’ve got a lot of what we call vertical land. Of course with that vertical land, you get a lot of runoff when you get these heavy, heavy rains. So it keeps eating at the creek banks,” Nigon said. “They’re trying to put in some of these cedar trees and hopefully save some of these banks from eroding away.”

In the past five years, Nigon said he lost about six feet of streambank in front of his cabin. Before the CCMI crew started work last year, he said three 5” rains shifted one bend in the stream 25 to 30 feet. Later, a 7” rain tore out some of the anchors. Those were replaced and fortified.

The cedar revetments in Houston County were new to the Root River SWCD in 2014. Staff partnered with a Winona State University geologist who helped assess the streams. The method is more common in Missouri. Scanlan recalled the initial reaction.

“At first they didn’t know what would happen,” Scanlan said. “All they could think about is, ‘What if we end up with 40 cedar trees stuck in a culvert somewhere with a cable wrapped around it?’”

The Riceford Creek project has withstood a few tests.

Most cedar revetments held up to the September 2016 flood that decimated parts of the creek. Additional revetment areas saw some damage over time. But Scanlan said the revetment seems to be working overall, as stability has improved in most of the original streambank treatment areas. Those results mesh with Winona State University’s follow-up research.

“We’ve gained a lot of confidence in this kind of work,” Scanlan said. “Those trees are still in place. As the years go by, those banks start to stabilize themselves … and you end up with a more stable streambank and less sediment.”

In past years, a crew of eight to 10 worked on Root River SWCD projects for 40 days.

“They did a good job. They were hard-working people — ladies and gentlemen,” Nigon said. “I was happy with the work they did.”

On projects such as the Riceford and Bridge creek cedar revetments, the SWCD works with willing landowners on prioritized sites. Word of mouth generated interest among neighbors. The work is done at no cost to landowners, who, like Nigon, might contribute labor.

Nigon planned to seed the streambanks himself. On the bluff, where he’s counted at least 16 species of native grasses and plants, he’ll wait to see if the remnant prairie spreads.

“Nothing will grow under a cedar tree, so when you cut them down that opens up that land,” Nigon said.

The Minnesota Board of Water and Soil Resources’ mission is to improve and protect Minnesota’s water and soil resources by working in partnership with local organizations and private landowners.