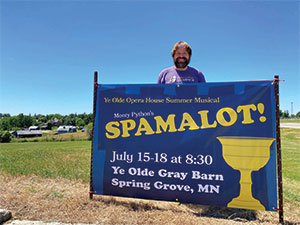 In 1979, the tiny, tenacious town of Spring Grove put on a play. Forty-two summers later, they’re still at it.

Like most good stories, this one’s not that simple. But stewed down to basic ingredients, it is one of community, a can-do spirit and a faith that magic can be captured inside a big old barn and reflected upon a summer hillside.

For those not versed in the musical Spamalot, or the Monty Python work it’s based upon, think King Arthur, Round Table knights, a mystical lady who lives in a lake, medieval villagers and the classic hero’s journey – aka quest. Get ready to laugh, because Spamalot is funny – a delightfully smart, farcical sort of funny. It’s a show about always looking on the bright side of life, like its well-known signature song suggests.

YOOH has been waiting a long time for this show. “We first applied for rights in 2010,” said YOOH’s David Storlie, “It was touring the country and we couldn’t acquire rights for at least five years, but we kept trying.”

Python offered a shortened, smaller cast “concert-ish” version, we jumped at it, read it and loved it,” noted Storlie.

Kay Cross is this summer’s theatrical and musical director. Full cast and crew listings and advance ticket reservations are at yeoldeoperahouse.org or (507) 498-JULY.

Reserved seats are $16. General admission is $12; those holding general tickets should bring their own chairs. Gates open at 7:45 p.m. Golf carts will be available to those desiring assistance on the hill. Popcorn and soda will be available. There will be no intermission.

“That first year is a blur – but a good one.” -SG resident recalls YOOH history.

That’s how Spring Grove’s Mary Deters remembers the summer of 1979.

Most towns have someone – or many “someones” – like Mary Deters in its midst. She’s that generous spirit who always signs up for “anything community.” She’s taught lots of kids, been in lots of shows and sang for hundreds of families in celebration and sorrow. Her laugh is unforgettable. And she was with YOOH at the very beginning.

In May 1979, Deters remembers Alice Spenser walking into her classroom saying, “Let’s put on a musical.” Deters said she did “what she always did” when Spenser had one of her “less realistic” ideas: she agreed. Then she ran into Jane Wold at church who said, ‘This we have to do!’ Deters, Spenser, Wold, Audrey Liudahl Atchison, Janna Myrah, Kathy Jacobson and Annette Norgard were in attendance at YOOH’s first meeting. “We soon enlisted the aid of Karen Gray, who had a background in theatre,” said Deters. Local physician Dean Whiteway became the first pianist.

This fledgling crew had no money, no show and no theatre. But they raised enough money and got show rights to Annie Get Your Gun. Cast as leads were Mary Beth Alstad as Annie Oakley and (then) Trinity Lutheran Church pastor Ken Knutson as Frank Butler. Karen and Jim Gray donated use of their barn, which was cleaned by local 4-H students and community volunteers.

The stage, Deters added, was half of its current size and surrounded by chairs from Roble Funeral Home. Bleachers were borrowed from the city ball park. Costumes came from the Preston Historical Society because Nancy O’Connor knew someone there. “With the tiny bit of money we’d raised,” said Deters, “we made a few costumes, bought make-up, lights and paid our directors a pittance.”

Eventually, a constitution and bylaws came into being. Costumes were moved from the Gray’s sprawling attic to a new Main Street location and programming expanded throughout the years. “Whenever YOOH has needed financial backing or sweat equity, the community has responded overwhelmingly,” said Deters.

Spring Grove’s Jen Solberg joined the YOOH family as a five-year-old. YOOH, she said, is where she met her husband Scott, and it’s a reason they live in Spring Grove as adults.

The YOOH experience is one the Solbergs now share with their own children, thanks to the theatre’s youth options. “I believe that theatre can help children find a safe, supportive place to share their thoughts and ideas.” This August, youth will perform The Very Unmerry Adventures of Robin Hood.

During the pandemic, YOOH pulled off three virtual productions and two outdoor ones, illustrating resilience, creativity, or as Solberg suggests – “some stubborn Norwegian-ness.”

Whatever one calls it, the fact remains that the curtains close on many community theatres in under 10 years – but not YOOH. “The organization continues,” said Deters, “not because a handful of people began a years ago, but because the community supported it in the beginning and does so to this day.”

And while Storlie said he loves working in any performance location, Ye Olde Gray Barn remains a special place. “It’s the history that makes us continue,” Storlie said. “We all want to pick up the mantles of those who tread the barn floor before us. It is a great family event and we are all family at the barn.”