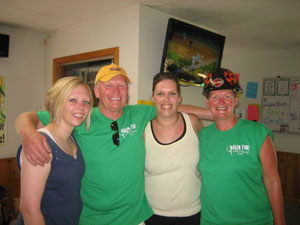 When Lindsay Eide married her husband Chad, she knew she was marrying into a family that loved to golf.  Since she also enjoyed golfing, it  was a perfect fit.

In 2010, Eide had an idea to turn the Eide family’s passion for golfing into a fundraiser for Amyotrophic Lateral Sclerosis or ALS.  Also known as Lou Gehrig’s Disease, ALS is a progressive neurodegenerative condition. Chad’s grandfather, Glen Eide was diagnosed with ALS in 2000 so the family had a personal connection to the disease.  A few years before that, his family had hosted a foreign  exchange student from Ireland named Jenny McGrath.  When Jenny heard  about his diagnosis, she quit her job in Ireland and flew back to help take care of him.  Sadly, Glen passed away in 2002.  Since then, she has been able to return to the U.S. several times for visits and to  participate in some of the golf tournaments.

Eide organized the first golf tournament at the Lanesboro Golf Course in the summer of 2010 to raise money for ALS and asked friends and family to sign up.  “It got to be bigger than I thought it would be,” she laughed. People even brought items for a silent auction, something she was not expecting.  Each year since then, the event has gotten bigger.  Players of all skill levels are welcome to play.

To give everyone a fair shot, the tournament is “flighted,” which  means that after all the scores are in, the teams are broken up into  groups and the top three or four teams from each group wins some money. “We get a lot of people who only golf one a year, and this is it,” Eide pointed out. “It (flighting) makes it fair for those who  don’t play as much or aren’t as good.”

Eide makes the golf tournament fun for everyone with games on  different holes where players can win prizes.  At the eighth hole,  anyone over 21 is invited to take a shot of Southern Comfort, which was Glen Eide’s favorite drink.

Eide puts a lot of time into asking local businesses to donate to the  tournament.  “Now that I’ve done it for a few years, I know who to call for donations,” she said, adding that she always tries to reach out to new potential donors each year as well as the ones with whom  she’s already established relationships.

The silent auction is held during and after the tournament, when everyone gathers at the golf club for food and drinks.  The auction includes donations from local businesses, autographed sports prints, gift baskets, and more. There is also a big raffle each year, with  this year’s prizes including things such as a big screen tv, grill,  power tools, etc.  Everyone who plays in the tournament also walks away with a door prize.

The money raised at the tournament is usually donated to the Minnesota chapter of the ALS Association, but when Eide hears of a local family  who has been affected by ALS, she makes sure that a portion of the  proceeds goes to them.  “One of my favorite things about doing this is presenting the checks,” she said.  Eide loves bringing a personal touch to the tournament by helping local families and has seen some of them get involved with the event as well.

The ALS Association of Minnesota has informed Eide that the  tournament, which is going into its tenth year, is one of the longest  running events it has.  Over $45,000 has been raised and donated to  the Association during that time.