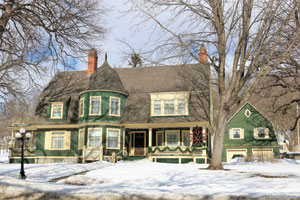 Imagine getting away from the ordinary and stepping into the exquisite. The grand scale of the Oakenwald Terrace in Chatfield, Minn., will whisk visitors away to days gone by, with dramatic flair.

Owned by Marion Lund, the bed & breakfast innkeepers are her son Bob and daughter-in-law Ruth Ann Lund.  Ruth Ann performs the day-to-day running of the business, spending many hours per week at Oakenwald Terrace to assure everything will exceed guests’ expectations.

Touted as “Southern Minnesota’s Premiere Bed & Breakfast” on its website, the home has a very rich history.  Ellen Lovell commissioned the building of the large and elegant home in 1896 and it was completed in 1897.  The home was built subsequent to her husband Charles’ passing away.

The day after the family moved into the home, a wedding was held for her daughter.  “The house was really supposed to be for their daughter and future son-in-law, but they never wanted to live with Mom so they moved on,” states Ruth Ann. Not long after, her son moved, as well.

“Mrs. Lovell lived here basically with servants for quite a few years — a quarter century or so,” notes Ruth Ann.  There is a doorway in the house that at one time separated the family quarters in the front of the house from the servant’s quarters in the back of the house, as well as a front staircase and back staircase used for the same purpose.

Following Mrs. Lovell’s death, the home was used for various purposes — a private home, rental property, a church and an assisted living home. After being purchased by Shelby and Marion Lund in 1973 it continued as assisted living until it was converted into a bed & breakfast in 2003.

The plan had been to turn the home into a bed & breakfast for many years and although Shelby did not live to see the complete transformation, his preferences are seen and felt throughout the house as well as outside in the gardens.

Over the 30 years that Marion was operating the home as an assisted living facility, she and her husband would take day trips when possible to get away for short time.  On these trips within the five state area she would seek out and purchase antiques of all kinds, which are featured throughout the house.

The exterior of the home, which is listed on the National Register of Historic Places, is a perfect example of shingle style architecture.  The turrets and porches add style to the building, giving the house a very eye-catching view.

The interior of Oakenwald Terrace is bursting with quality.  From the magnificent wood used throughout the house, including curly birch, white oak and birds eye maple, to the high-end furnishings, antiques, photographs, pocket doors and the original two story stained glass window right down to the lamp shades, it is obvious every detail has been attended to.

Oakenwald Terrace has six guest rooms, each with its own bathroom, and several common areas, which are large enough to accommodate several guests comfortably.

The common areas include the graceful dining area where four-course breakfasts are served, the parlor which holds an organ,  a piano and many other instruments visitors are encouraged to play, the library that holds numerous books guests can borrow, a screened-in porch and three decks.

Mrs. Lovell’s Room is luxury at its finest with a fireplace, large sitting area, queen bed and a full private bathroom.  The Round Room, so named for the round wall and unique rounded glass in the windows, has a bed larger than king size and a bathtub with shower.  Frink’s Room, which belonged to Mrs. Lovell’s only son, Frink, has a roomy sitting area and a private bathroom with a shower.

The Blue Room, which despite being part of the servant’s quarters at one time, is larger than many standard rooms and has the added bonus of a walk-in closet and a private bathroom with a tub and shower.  The Terrace View Room offers not only a large well-furnished room and private bathroom, but also an opportunity to step out onto the second level deck which leads to the terrace in the back yard.  The Doll Room, located on the third floor, showcases a fainting couch along with a collection of dolls hand chosen by Marion, a queen size bed and private bathroom.

Although Oakenwald Terrace showcases the past, there are modern conveniences as well.  An addition was put on the back of the house years ago which accommodates the bed & breakfast very well, as they added a commercial kitchen on the main floor and a large laundry room and office in the lower level.

Many hours can be spent appreciating the workmanship in the house, from the accents on the ceilings to the wood floors and everything in between.  “You just don’t find this kind of antique collection in people’s homes, in fact, you have a hard time finding this type of collection in an antique store,” states Ruth Ann.

Oakenwald Terrace will host family reunions, birthday parties and other events, including weddings.  “We have had quite a few weddings here,” says Ruth Ann.  “It’s really such a romantic setting — so charming,” she notes.

Oakenwald Terrace is located at 218 Winona St. SE in Chatfield.  For additional information on Oakenwald Terrace, including the two guests houses available nearby, phone (507) 867-3806 or visit oakenwaldterrace.com. 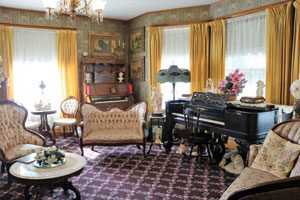 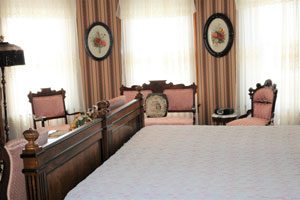 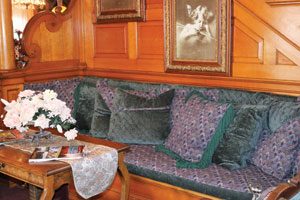 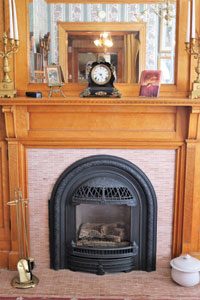 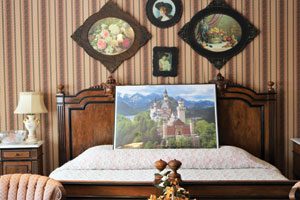 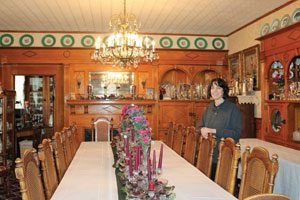