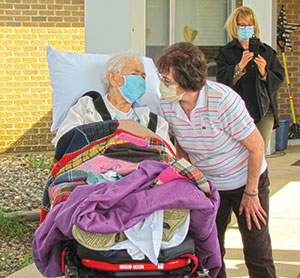 In 2015 Seasons Hospice was contacted by two local paramedics to see if they were interested in partnering with Mayo Ambulance. The program, Last Sentimental Journey, is based on a program in Colorado. The program is similar to Make a Wish. The program fulfills a hospice patient’s wish to go out one last time. Humble explained, “There is no cost to the family involved. Mayo Ambulance covers the cost of the ambulance, gas, and two paramedics.”

Past Journeys have included weddings, baptisms, graduations, Vikings games, Twins’ game, a visit to the Veterans Cemetery in Preston to see their final resting place, and a casino. One patient wanted to go back to their cabin that they called their happy place. The shortest trip they took was to Paws and Claws so the patient could go in the cat room to cuddle with the cats.  One patient asked to go fishing one last time. The owner of a pontoon, a Marine vet, let them use his vessel for the day, and he was the captain for the day.

Another patient wanted to go to a Viking pre-game. The Vikings went all out. Retired Viking players sat with the patient in the spectator box, and one Viking let her wear his super bowl ring. Humble estimated that they had made 30 trips since the project started.

Husband and wife paramedics – Phil Grodevant and Hillary Grodevant volunteered to drive the Mayo Ambulance on Sunday. The couple has jointly been with Mayo Ambulance for 35 years and has volunteered on at least five Last Sentimental Journeys. The paramedics will have the patient’s medicine on board to keep them comfortable. Hillary Grodevan mentioned that the farthest they have driven was from Rochester to Mankato to the North Shores.

“It’s very rewarding and nice to do it for the family and the patient. It gives the patient a sense of normalcy,” shares Hillary.

Jertson was greeted at 11 a.m. by her grandchildren and great-grandchildren, David and Heather Steiner, Cordell, Evelyn, Arthur, and Lyndon; Dave Jertson and Melissa Kochevar and Addison and Carter Jertson; Tim, Lora, Ethan, and Madison Schwalbe; and Jamie Bjortomt and others at the Spring Valley Care Center. Only one grandson Brian Bjortomt and his daughter Raynee were unable to attend.

There were also surprises! Jertson’s boyfriend, 95-year-old Charlie Fravel, whom she had not seen in over a year because of COVID-19, spent the entire day with her.

The group then headed to the park for a picnic, where they enjoyed Casey’s pizza, reminisced, and took lots of pictures.

Jertson, covered with a colorful, crazy quilt made by her sister in 1974, kept her warm as it was windy out and cool in the shade. The quilt has family members’ names embroidered on it, including her five siblings and eldest grandchild, making it even more special.

Kim Wright, Jertson’s former daughter-in-law, joined the outing. Wright shared that she loves her dearly and “wouldn’t have missed today for the world.” Wright went on to express that she was “very fortunate to have her in her life.”

The next stop. Judy Kramer, a relative, was on hand to meet Jertson at the Union Prairie Church. “The Last Sentimental Journal is a good program. We did not know about it,” she shared.

The third stop was at the Harmony Manor, where Jertson resided for several years. Staff members and residents came outside to say hi and chat with her. Heidi Rued from Pine Lake drove down to “hang out with Shirley” at the Harmony Manor. Rued was mentored by Shirley during her youth, and the two would “hang out,” playing board games and watching movies together.

Another surprise! The final stop of the day was the Cherry Grove Church, the church Jertson attended for several years. Pastor Deanna Woodward welcomed Jertson and shared with her that members of the church, family, and friends were on hand to greet her. The crowd broke out in a round of applause as she entered the church sanctuary. Janine Sherry sang “The Walls of the Angels,” which was the same song she sang for Jertson at her 80th birthday party. The trio also sang “The Ballad of Jed Clampet” and other Christian and country favorites, followed by Holy Communion. Mark Woodward, co-pastor with his wife Deanna Woodward, mentioned that the Last Sentimental Journey is “very meaning, very supportive, and very moving and everyone was able to participate.”

Talking with Bjortomt after she had a chance to rest after a busy couple of weeks organizing the event, she stated that she was pleased with the event. “Fantastic. It was just fantastic. It was a very emotional day. Mom was pleased. She was more alert than I have seen her in some time. Thank you to everyone who stopped by to say hi and chat with mom.”

If you know someone who would like to take their last journey, contact Chris Humble, Director of Volunteer Services at Seasons Hospice at (507) 285-1930.