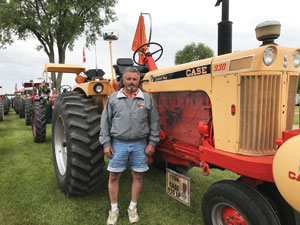 Anyone who lives or works in the southeastern part of Fillmore County probably noticed something unusual on Monday, June 10.  Tractors (lots of them!) came putt-putt-putting through, as part of the WMT Annual Great Eastern Iowa Tractorcade.

No, they hadn’t taken any wrong turns.  In explaining why an Iowa tractorcade was in Minnesota, WMT and WHO Farm Broadcaster Andy Petersen stated, “We were looking for something to signify the 20th anniversary, and to do something we’d never done before on Tractorcade.  What a great opportunity to go up to Preston and eat lunch with the 4-H’ers… Gorgeous country!”

Petersen explained that WHO Broadcasting began the Great Iowa Tractor Ride 23 years ago, because, “There’s an awful lot of interest in the history of agriculture on display… and there really wasn’t anything like this back then… Three years later, WMT decided to do the same thing in eastern Iowa.”  The initial event was started by WHO Radio Farm Broadcasters Mark Pearson and Gary Wergin.  The WMT Tractorcade was founded by Matt Kenney and Bill Poston.  Petersen said this year’s Eastern Iowa event features around 500 vintage tractors, and nearly 1,000 riders/drivers.  Petersen pointed out that the number of people obviously brings a significant economic benefit to the communities they visit, and he praised the various community groups and law enforcement agencies that helped welcome the event and assisted in it running smoothly and safely.

The tractors arrived at this year’s headquarters (Howard County Fairgrounds in Cresco) on Sunday, June 9.  Monday through Wednesday (June 10-12), each day had a route for tractors to go “on tour” through some nearby communities, ending the daily rides back where they started.  The tractors rolled up approximately 70 miles per day, with the first day being the jaunt up into Fillmore County, passing through the communities of York, Greenleafton, Preston, and Harmony, plus a stop at Niagara Cave, before heading back to Cresco.  Petersen stated, “The scenery has been fantastic.  It was a great first day of the ride.”

According to Petersen, the annual event draws tractors, and tractor enthusiasts, from all across the USA.  He said this year, people came from as far as Arizona, Kentucky, and Michigan to watch and/or participate.  He added that the Tractorcade is really all about “the relationships that have been built over the years.  We’ve had marriages on the Tractorcade,” as well as countless friendships forged and maintained.

One of this year’s tractor drivers, Neil Hammersland, of Hawkeye, Iowa, was asked what he likes best about the event.  He grinned and replied, “Eleven miles an hour, and no cell phone.”  He explained that the tractors are divided up into six groups (a 10mph group, three 11mph groups, a 14mph group, and a 15mph+ group) which accounts for the large gaps between groups as the tractors drive their route each day.  Neil said he’s gotten to know many of the drivers, and will occasionally bump into them elsewhere.

Neil’s tractor is a 1966 Case LP, which he’s had for nearly 40 years, and he says, “It’s my baby.”  He mentioned that he really enjoyed the rolling terrain of Fillmore County, and the meal and facility in Preston were excellent.  Neil said 2019 is his 14th year riding in the event, and he added, “I’ll be back next year.”

Anyone interested in seeing more pictures and/or information about the event is directed to the Facebook page “WMTtractorcade.”  Petersen said next year’s route isn’t known yet, but the 2020 planning is already underway, and he hopes they’ll venture outside of the Hawkeye State again in the future.