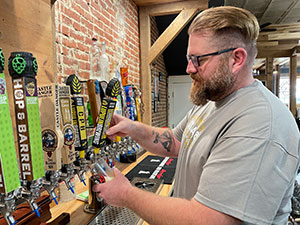 Stellar 181 Taphouse – Spring Valley’s newest eatery – was buzzing last weekend. Locals and visitors are catching on quickly to the many offerings owner Alex Slifka and his team are serving up. That includes 20 beers on tap, a full liquor lineup and a quarterly menu that Slifka describes as a “step up from regular bar food” with a focus on house made and not a lot of frozen items.

One popular example is the Brewhouse Pretzel Board, which features a combination of pretzel balls, pretzel sticks and a pretzel braid along with homemade queso, honey mustard, barbeque and beer cheese sauce. Other highlights include a potato board, what Slifka describes as “killer” nachos, loaded BBQ pork fries, an array of burgers and sandwiches, salads and steak dinners.

“Everybody’s been digging our steak so far,” Slifka says. “The other night, I sold an Iowa chop to a pig farmer, and he was like ‘holy buckets, that was really good, and that’s us being hog farmers.’”

Slifka’s beer selection – which focuses on local craft beers from Minnesota, Wisconsin and Iowa – can be just as convincing. When a couple of guests recently asked for Bud Light, which Slifka doesn’t serve, he offered them to try a Fulton Lonely Blonde.

“They each had three beers, and they came back and had it again another night,” Slifka says with a bit of pride beaming in his eyes.

Slifka isn’t a newcomer on Spring Valley’s business scene. His wife, Jenn, owns Chateau de Chic Salon & Spa and Chic by Chateau – a women’s boutique – just a couple of buildings down on Broadway Avenue. And located right next to the taphouse is Alex Slifka’s mother-in-law, Suzanne Gerdner with her coffee shop and catering busines, Some Like It Hot. Conveniently, all four businesses are connected inside, which Jenn jokingly refers to as “Spring Valley’s mini mall.”

While Alex Slifka has largely stayed in the background as property manager, remodeler and wood worker, his purchase of the old tax office building on Broadway two years ago wasn’t originally meant to lead to the opening of a taphouse. Slifka’s plan was to rent out the building, but when that fell through on short notice, it was decision time.

“We asked ourselves ‘What the heck do we do?’ We always talked about opening up a bar and restaurant, so let’s open up a bar restaurant,” Slifka says.

That set off a chain of events that allowed Slifka to take full advantage of his creative skills, as he converted the old tax office into a taphouse, completing much of the interior construction and design himself. Along the way, he paid much attention to detail, uncovering the old tin ceiling and hanging century old light shades above the bar. And when it came time to use the original bricks to close an opening above the bar, he refused to use regular mortar to do the job.

“We made it like they made it back in the day, where we soaked lime for three weeks in water, and then you mix it with sand. That way it isn’t so white,” he explains.

Asked how he settled on the taphouse idea specifically, the Slifka’s other passion comes into play.

“We like beer,” Jenn says. “We like going to places around here, but you can never get anything interesting, it’s always the same beers on tap, unless you go to a brewery, and we’re looking for things that are intriguing.”

That lead to offering a “fun variety” of local and regional craft beers at Stellar 181 and the idea to find a way to offer beers from smaller breweries that only distribute locally.

“I would love to find a way to maybe get a keg from a brewery in Duluth, for example,” Alex Slifka says. “I hope we can get there, it’s just the logistics.”

And he stresses that he is not a beer snob.

Two of Slifka’s bestselling beers currently are the Hop & Barrel Lemonbreaker and Minnesconsin. That also bodes well for a side project Slifka is working on. Later this year, he plans to team up with the new Hop and Barrel Brewing Company just up the street to provide food to Hop & Barrel’s patrons. That collaboration may also include a farm to table event later this fall.

Until then, Slifka is enjoying running his taphouse, which he opened three weeks ago, after a yearlong pandemic delay. But now he’s enjoying every minute of working in an environment he created entirely himself.

“That’s half the reason. I’ve built so many things for other people and don’t get to enjoy it. It’s nice to build something to myself,” he says.

Currently, Stellar 181 is open Wednesday through Saturday from 3 until 11 p.m., with Sunday service starting in time for football season on September 12. A Sunday brunch is also in the works. The Slifkas also maintain an active Facebook page for their business at “Stellar 181 Taphouse,” which has already developed a big following.