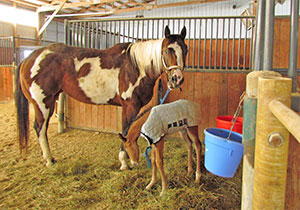 Dr. John Bengfort grew up on the family farm in northeast Iowa around Ossian and Postville. The family raised dairy cattle and hogs but no horses.

After high school, Bengfort, a Vietnam veteran, served in the Army. After serving in the Army, he returned to Iowa to attend college and the Iowa State veterinarian school. He could attend college thanks to the G.I. bill and graduate without being burdened by hefty student debt.

After graduating from the vet school, Bengfort returned to northeast Iowa to work at the Allamakee Veterinary Clinic in Waukon for one year. His second year out of school, he began working at the Winona Vet Clinic, from 1977 to 1988 before venturing out on his own. In 1988, he started the Bluff Country Equine Veterinary Center, Winona. The Center’s business is 20% cows and 80% horses. Bengfort mentioned that a large share of the clinic’s clientele is trail people.

So why develop a practice dedicated to the well-being of horses? As a young vet at Winona Vet Clinic, Dr. Bengfort was assigned to visit a client and check on a horse – Secretariat 1. Secretariat 1, the first off-spring of Secretariat, 1973 Triple Crown winner – the Kentucky Derby, the Preakness, and the Belmont Stakes – is where Dr. Bengfort’s story starts.

Dr. Bengfort went to Colorado and completed an extensive program on the equine reproductive system.

Dr. Bengfort also cared for Cody the Buffalo. Cody is known for his role in Dances with Wolves. Cody was abandoned at birth by his mother and raised by Mike Fogel, of Money Creek Buffalo Ranch, who took him home to raise. Fogel trained Cody with Oreos. If you have seen Dances with Wolves you know that Cody charged the young Indian boy, Smiles a Lot. Ever wonder how they got him to charge? The film crew shook a bag of Oreos, causing Cody to run toward the camera to get a treat. Cody also starred in the Radio Flyer movie and a Taco John commercial for the Buffalo Crunchy Chicken Burrito. Cody co-starred with the Energizer bunny, starred in the Subway commercial for the Buffalo Chicken sub sandwich, and one for Pray for Mother Nature jeans, plus did many public performances. After a lifelong career in the public spotlight, Cody died from kidney failure in 2006.

The Bluff Country Equine Veterinary Center became involved with the Harness Racing Association, which is a group between Iowa and Minnesota. This association is all Standardbred horses – pacers and trotters. Dr. Bengfort explained that the group has a program where if a stallion

is standing in Minnesota and breeds a mare, and down the road that offspring wins at the track, there is a bonus added. Iowa will add a second bonus if that baby is born in Iowa. So, you have Minnesota bred and Iowa born. The clinic became involved over the years in the breeding side of things. Right now, the clinic has 15 Standardbred stallions. “Some people call it insane,” laughed Bengfort, “but it keeps us busy during the breeding session.” According to the Harness Racing rules, the stallion has to be at the breeding facility from January 31 to July 1. The clinic freezes semen and ships it all over the country, as well as breeds mares on site. Last year there were 20 registered Standardbred stallions for the Harness Association in Minnesota. The clinic works with the Amish who do the same thing. The Amish have five stallions, so the clinic was involved with 16 of the 20 stallions last year.

The equine industry has stayed stable over the years as compared to the cattle industry which has seen a decline, and the small animal industry has expanded, especially over the last year – it has exploded due to the pandemic.

What does the future hold for this seasoned veterinarian? He would like to retire.

Bluff Country Equine Veterinary Center is located adjacent to Interstate 90, seven miles outside of Winona at 29161 Wilson Frontage Drive. Dr. Bengfort can be reached at (507) 452-8665 or bluffcountryequine@gmail.com. Check out their website at www.bluffcountryequine.com.