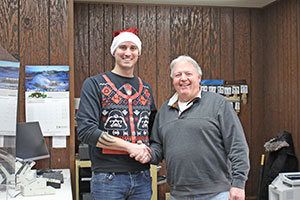 After 53 years of the Reicks family owning and operating the Reicks Auto License Bureau, the torch has been passed. On December 1, 2021, Sean and Bethany Feind officially took ownership of the office. “Hands were shook and papers were signed,” Sean said, adding that Kurt Reicks has still been popping in to check on things as Sean transitions to his new role as a small business owner.

The Auto License Bureau had been in the Reicks family since 1968 when Grace Reicks owned it. Thirty-two years ago, it changed hands when Grace retired and her son Kurt and his wife Brenda Reicks purchased it. Since then, there have only ever been three employees. Dawn Ristau stayed with the business after Kurt took it over and continued to work there until the end of 2020. “She’d been here more years than I had,” Kurt commented. When Dawn retired, Kurt hired Bonnie Johnson to replace her. The third employee, Maren Gilsrud has been with the license bureau for five years. When Kurt sold the business to Sean, they mutually agreed that the employees would stay with their current jobs.

Kurt had been thinking about retirement, so when the opportunity arose to sell the license bureau to Sean, he decided to take it. They began the process in March of 2021 and it was finally completed on December 1. Kurt plans to stay busy though, as in addition to being mayor of Preston, he is still part-owner of Reimann Crop Insurance in Preston, manages real estate and mini storage, and also continues to drive school bus for Fillmore Central. “I’ll play a little more golf, do a little more fishing,” he said. “A big thank you to all my great customers and hope that they support Sean as well as they supported me.”

Sean Feind began working with the Minnesota Driver and Vehicle Services or DVS in 2013 as a driver examiner administering road tests. In 2019, he was promoted to Assistant Regional Supervisor and his duties grew to include everything from license renewals to payroll, auditing third party testers, and overseeing license offices in a nine county region. Through that position, he got to know Kurt and the Preston License Bureau.

Sean’s wife Bethany is originally from Spring Grove and the couple, parents of three beautiful little girls, are planning to move to the Fillmore County area at some point. They currently live in Rochester where Bethany works from home for Mayo Clinic. Although he is still looking forward to moving closer to Preston someday, for now, Sean enjoys the daily commute to his new job. “I wake up each morning looking forward to going to work,” he said. In the short time, he’s been working in Preston, he already feels like a part of the community and his daily morning walks to the bank and post office are a highlight of his day. “Everyone’s so friendly,” he commented. “It’s hard not to love it.”

Taking over the license bureau was a bit of learning curve for Sean, but as he had previously trained others how to use the computer system, and was very familiar with the motor vehicle department, he was able to step into his new role fairly quickly. It helped that the same employees were kept through the transition. “It was kind of plug and play,” he said.

Sean doesn’t have plans for any big changes just yet, although he is hoping to have the approval letter to begin administering Class D permit tests soon. He also created a Facebook page for the business so that he could utilize social media to connect with the community and updated the website. He hopes that people will leave reviews whether they’re positive or negative. “I want to be transparent,” he explained. “I want to know what we do well and what we can do better.” Other than the new and improved web presence, things are business as usual. “I want to get a real feel for it first before making changes,” he explained. He appreciates the homey feel of the office although he noted that Bethany is hoping to do some painting to freshen it up.

Sean wants to encourage people to “shop locally,” especially when it comes to buying vehicle tabs. Currently, the state is experiencing a shortage of 2023 tabs, but they’re in full supply at the Preston DMV. Customers can stop in to purchase their tabs or mail their renewals to the Preston DMV at P.O. Box 342, Preston, Minn. 55965 where they will be processed and shipped out the next day. If someone wants to save on postage, but can’t make it during the office’s open hours, they can drop their renewal and payment in the drop box by the front door of the Rustad Building, 201 Fillmore St.

More information on the Preston DMV can be found at prestondmv.com, facebook.com/prestondmv, or by calling (507) 765-2281.