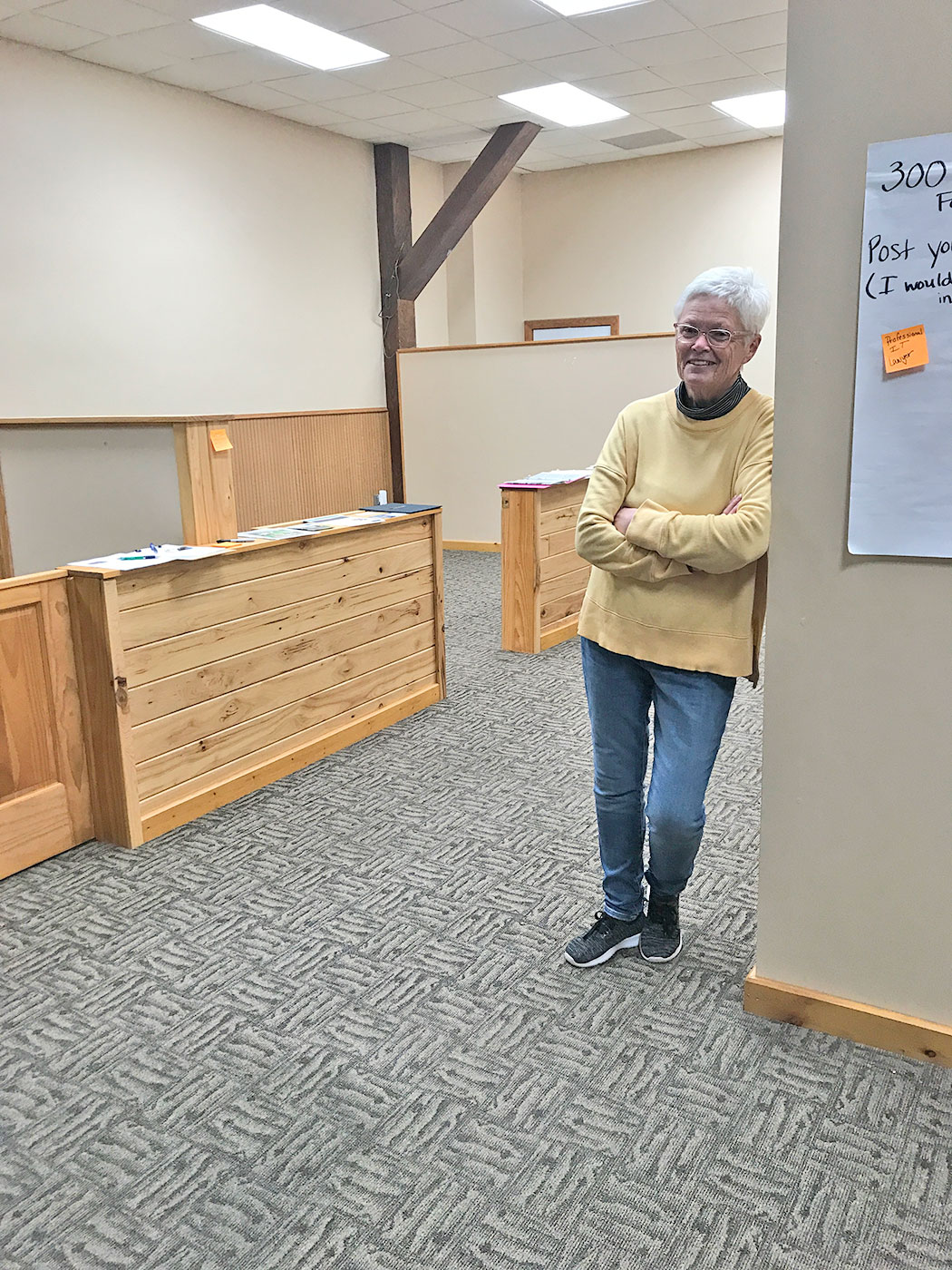 On a blustery, snowy November evening, buildings in downtown Rushford had their doors open for visitors in the Open Doors, a Tour of Business Opportunities, event. From 5:30-8 p.m., November 17, interested parties could tour the entire buildings including the “behind the scenes” areas of 10 available businesses and buildings.

Open Doors was the brainchild of Jen Hengel of the Rushford Peterson Valley Chamber of Commerce. Jen related that she subscribes to the Save Your Town website. Becky McCray and Deb Brown give ideas for rural and small town development on their site. They note that “small towns can best be served by their own people using their own resources.” Last summer, Jen saw that a town in Iowa had held a similar event and decided Rushford needed to do it as well.

Hengel’s hope for the event is that it generates people coming in for the evening and that they then recognize that it’s something Rushford needs to work on as a community. She commented, “It’s about remaining positive and optimistic about the future of rural towns.” Hengel noted that about half of the businesses for sale were due to people retiring from operating a successful, long-term business in that location. She considers this a huge opportunity for entrepreneurs at this time.

Mayor Terri Benson shared that her hope is that the night starts an “honest, open, and optimistic conversation — this is just the starting point.”

Rushford EDA, Rushford Historical Society, and Rushford Peterson Valley Chamber of Commerce collaborated to organize and hold the event. Historical Society members were available in many of the buildings to share the history of other businesses in that location. Posters were created with accompanying Post-it notes for visitors to post suggestions for the future of use of each building.

At the historic limestone building at 100 Jessie Street, former home of a hardware store and more recently various restaurants, real estate agent Patrick Peterson was enthusiastic about the attention in the property generated by the Chamber, other businesses and banks with this event. He shared that five groups of people had toured the building in the first half hour of the event. The building has generous living quarters upstairs in addition to a full commercial kitchen and beautiful bar. Suggestions on the poster were for a Mexican restaurant, a corner pub, or a brewery.

Across the street at the former newspaper office, tour guide Nancy Snyder shared that some students from R-P had come in. Their teacher had given an extra credit assignment to students. Snyder enthused that it was great to have input from community youth, “What do the youth want?” Suggestions on the poster here included professional IT, lawyer, bike shop, bakery, or dog groomer.

The former Mill Street Mall building was open for visitors as well. The building has been thoroughly cleaned and stripped down to studs after a fire last year and is ready to be customized for a buyer. The cleanup exposed several small doors that had been covered in a previous remodel. One of those doors measured a mere 26” wide with a 76” height. At the rear of the building was a big garage door that had been used with a ramp to drive cars down into the basement. This had been used when the location was a car dealership. Current owners, Jim and Brad Hoiness, said that senior citizen apartments were still being considered for the location as well. Jim Hoiness called the event a great idea even if lots of people didn’t come out that night. The word is out that there are some great opportunities in Rushford.

Shawnee, who owns Shawnee’s Bar and Grill, shared that she and her former husband ran a bakery at the location for 11 years and she has run the Bar and Grill for 14 years. She’d love to not have all the responsibility of running the business; she wants more time to visit her sons and grandchildren in Texas and Colorado.

Jessie Street Java had three or four groups come through. Kevin and Amy Feller, the current owners, expressed their gratitude to the Chamber for the event, noting that it had generated a lot of exposure. Jessie Street Java has a good customer base; the owners just want to move on and help Kevin’s mom on her farm. “Hopefully, this won’t be a yearly event! — everybody will sell!” Kevin quipped.

At the former location of the Sterling Drug Long Term Care Pharmacy, owner Tom Witt also extended kudos to the Chamber and Jen Hengel for their work. He pointed out that his building had three separate entrances with a multitude of electrical outlets, making it suitable for a variety of businesses. Ideas generated there for future use included, a coffee shop, gift shop, professional use such as law or insurance, or a hunting and fishing shop.

Stumpy’s saw several groups come through with ideas of a restaurant or bakery. Owner Judy Christian shared it was time for her to retire; while she enjoys the restaurant, her knees and ankles can’t take the work. Judy has been involved for 40years at Stumpy’s and is ready to retire and spend more time with her family. Judy also thought the event was a great idea and was hopeful another such event could be held in the spring.

Norsland Lefse owner Mark Johnson said he too had had several interested groups come through. Possible uses for the establishment were as a deli, restaurant, or commercial kitchen. Hopefully, someone will continue to produce lefse for the niche market that depends on Norsland Lefse for their Norwegian treats.

At Loken’s Rushford Inn, realtor Kelly Meyer enthused that the event was a very wonderful, positive exposure for the motel. Several groups with hospitality backgrounds had visited and were impressed and surprised by the cozy, homey feel of the motel.

The tenth location on the tour was property and remaining buildings from Farmers’  Elevator. An eleventh property, the former Subway location, had been removed from the tour for a great reason. The building’s owner had already entered into a new lease agreement.

Now it’s up to Rushford, how will the town move forward. Hopefully, the event successfully ignited some new ideas for the Rushford community!