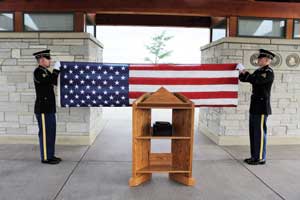 The Minnesota State Veterans Cemetery located in Preston, Minn., has garnered a large amount of attention since it opened in 2015, and those who have visited the final resting place for our country’s heroes have been impressed with the beautiful and peaceful surroundings.

But many people, whether residents of Fillmore County or far beyond, have not learned a lot about who is eligible for burial, the procedures, any costs incurred and other important information.

According to a press release from the Minnesota Department of Veterans Affairs on July 10, 2017,  “a recent news article generated a high number of inquiries from veterans and spouses interested in future burial” at the cemetery.

Due to the high volume of interest, a media day was held at the Minnesota State Veterans Cemetery – Preston on Thursday, July 20, 2017 from 8-10 a.m. in which members of the press from Minnesota, Iowa and Wisconsin were invited to attend.

The event was designed to “build on that momentum and provide the media with information to further spread the word to veterans and families in the tri-state area about burial options in the State Veterans Cemetery” to further inform the public, stated the press release.

“Although State Veterans Cemeteries differ from VA national cemeteries, both work toward a shared goal of providing eligible veterans and spouses with military burial honors within 75 miles of their home, nationwide.  Thus, Iowa and Wisconsin veterans may be eligible for burial at the Preston Cemetery,” stated the press release.

Media were allowed to tour the cemetery at their leisure, were able to view simulated funeral honors by the Minnesota Honors team, and see an abbreviated sample funeral service.  Members of the press were encouraged to ask questions and had many photo opportunities.

Robert Gross, Preston Cemetery administrator, stated to attending media members that he and the cemetery staff were “really trying to put this in the eyes of the family” to explain and demonstrate the process.

First an explanation of who is eligible for burial at the Minnesota State Veterans Cemetery in Preston;  burial is “open to all veterans discharged from active military service under conditions other than dishonorable.  Their spouses, minor children, and under certain conditions, unmarried adult children are also eligible for burial,”  according to information handed out by the cemetery.

The informative brochure, which can be obtained at the cemetery in Preston, goes on to say, “eligible spouses may be buried even if they predecease the veteran,” which is a question many people have.

Burial is provided to eligible veterans at no cost no matter which burial option is chosen. The fees for a spouse or eligible dependent effective July 1, 2015 – June 30, 2016 is $745 for any burial option.  Fees for dependents cannot be paid in advance and will increase annually on July 1 of each year.

The burial options are casket, cremation (in-ground) and cremation (columbarium).

Along with a gravesite or columbarium niche, a pre-placed graveliner, a headstone or niche cover and perpetual care are also provided.

Military Honors can be arranged which include rifle volley, taps, flag folding and presentation.  The family or a representative of the family are responsible for choosing clergy for the service.

Pre-registration does not reserve a certain gravesite or columbarium niche, however, as the cemetery administration assigns gravesites at the time of death.

Urns can include items special to the deceased and their family.  Some of the unique urns used at the veterans cemetery in Preston have been “a doctors bag, a tackle box, a tool box, and a lunch pail” stated Cemetery Representative Sasha Holst.  Motorcycle gas tanks are often used as urns as well.

There is no cost for pre-registration, it takes about five minutes to complete the form and you are not “locked in” to being buried at the veterans cemetery if you pre-register.

Pre-registration forms can be obtained at either of the Minnesota State Veterans Cemeteries, including Preston or the second location in Little Falls, Minn., through your local county veterans service officer or online at MinnesotaVeteran.org/Cem.

All committal services are held in the committal shelter instead of the gravesite for several reasons, including the safety of the family, providing a nice location for military honors to be carried out and so the staff can continue necessary tasks throughout the rest of the cemetery.

All employees of the cemetery take their responsibilities very seriously, as Gross states, “With every funeral we perform out here we have one shot to make sure that it is correct, that it is respectful, that it is courteous — that it is the highest level that we can do” for our veterans and their families, including making sure that the American flag at the cemetery is at half staff for every committal service.

“We want everything to run smoothly for the families,” says Holst, so the entire staff is very vigilant to double and triple check all information throughout the process.

The grounds of the Minnesota State Veterans Cemetery in Preston are open during daylight hours, seven days a week.  The administrative office hours are Monday-Friday, 8 a.m. – 4:30 p.m. and is closed on state holidays.

“We would love for families to come and visit,” states Gross, whether the administrative office is open or not, but if it is the staff can answer any questions and is happy to give a tour of the grounds.