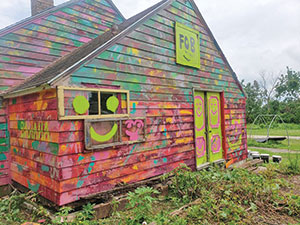 Here’s a story about how social media posts can become a record of malice.

On June 27, 2020, Canton resident Jamie Knutson made his intentions known with a post on his personal Facebook page.

“Does anyone have ANY paint they would like to get rid of?  Prefer bright colors any amount would be appreciated thanks,” the first post by Jamie Knutson.  Later that day, “I’m putting rainbow strips on something way bigger for our gay fargot ass city administrator,” he added.  When the painting was done, Holly Knutson (Jamie’s wife) posted “I think it turned out pretty awesome!  What you guys think?  Kids did a great job!”

Six photos had been posted, showing a building covered in multiple paint colors and messages that could be left open to interpretation. 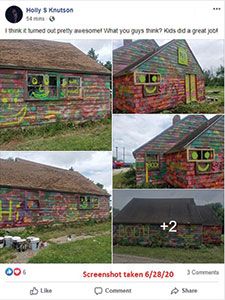 According to a letter presented to Jamie Knutson that was dated June 24, 2020, the City of Canton and Fillmore County Sheriff’s Office conducted annual property inspections on June 23, 2020.

The letter read, “Your property was found to be in violation of City of Canton Code of Ordinances 92.21 Building Maintenance and Appearance.  The accessory building (shown in the enclosed images) is considered a public nuisance.”

According to this ordinance, “No part of any exterior surface may have deterioration, holes, breaks, gaps, loose or rotting boards or timbers.”  In addition, “Every exterior surface that has had a surface finish such as paint applied must be maintained to avoid noticeable deterioration of the finish.  No wall or other exterior surface may have peeling, cracked, chipped or otherwise deteriorated surface finish on more than 20%…”  The letter concluded with, “Failure to correct these ordinance violations by August 3, 2020, may result in enforcement action.  Thank you for your prompt attention to this matter and for your voluntary cooperation in cleaning up Canton.”

The letter was signed by Canton City Clerk/Treasurer Brock Bergey.

According to Bergey, “Mr. Knutson was notified about the same building in July 2019, as well. He indicated his intent to tear the building down instead of investing in its repair. A year passed with no follow through on Mr. Knutson’s part.”

The Knutsons wasted no time in responding to the letter.  Within days of receiving the letter from the City of Canton, that’s when they took to social media.

Instead of focusing their concerns on city ordinances with respect to their property, they turned it into a personal attack on Brock Bergey regarding his sexual orientation.

This incident is currently under investigation by the Fillmore County Sheriff’s Office.  According to Sheriff John DeGeorge, “We are currently investigating the report.  We will evaluate it and determine if there was a crime committed.  Everything is easy to get, because it was posted on social media in a public domain.”  They will be working with the Fillmore County Prosecutor throughout this process, as well.