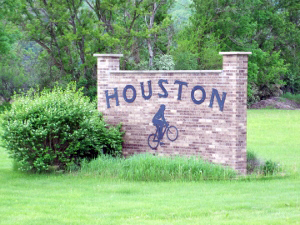 The Houston School Board met at 6 p.m. on Thursday, January 19, 2017. Following the Pledge of Allegiance, the board opened the meeting to public comment, of which there was none. Superintendent Krin Abraham answered questions about a new coach hire for 9th grade boys basketball. The B-team has 18 student members in 10th grade and below, prompting the scheduling of separate 9th grade games and a separate coach for the nine separate games. The hiring is pro-rated back to January, which is when the games were scheduled, and Abraham explained that the presence of more than 15 boys on the team made the new coach necessary. Abraham also went on to clarify additional new hires at Minnesota Virtual Academy to fill gaps left in math and German classes. Following that, the board dealt with an easement request from Houston resident Marlene Shultz regarding the use of former school property for a new construction’s driveway. There is a discrepancy between the platted lot and the paved road of about ten to 12 feet, making the west side of Jefferson St. inside Schultz’s property. Further complicating the matter is that the land falls inside a ponding area designated by the Army Corps of Engineers. Schultz’s architect spoke briefly and assured the board that the driveway construction will allow passage of water underneath from one ponding area to another. However, because of the ponding issue, the board chose to wait for a letter from the Corps or from the DNR before moving forward with granting the easement.

Next, the council heard a lengthy presentation from the Houston County Sheriff’s Department about the ALICE active shooter preparedness program. Matt Seitz spoke on behalf of the department regarding the response plans currently in place for active shooter situations, showing a video from a recent mock shooting event held at Caledonia schools. Following the video, Seitz stressed preparedness and repetition of strategies to ensure everything goes according to plan in the event of an active shooter. Seitz cited recent threats made at the Houston district, and carefully detailed how each step in the ALICE process works. A recurring theme of the presentation was a change from passive lockdown procedures to a more active response, encouraging students and staff to attempt escape, or to distract and even “swarm” the “bad guy” if necessary. Seitz stated that the poor accuracy of handguns would result in a better survival rate during a “swarm,” saying that one or two being struck is not a death sentence and is a reasonable risk to stop a mass killing incident.

“Can he continually keep killing?” Seitz said, “No, he absolutely can’t. And if he does shoot one of us, could he have done it accurately?” Seitz went on to cite that “seventy-three percent of the time, in the United States, when you get shot, they can fix you. You’re gonna live.”

“I feel really strongly about this,” Seitz continued. He went on to say that programs like ALICE can be used in all locations and events, and can “put a little bit of that ‘Warrior Culture’ back in our culture and not just be sheep to the slaughter.”

Seitz stressed the importance of the program again, claiming that “somebody dies every 15 seconds if we have nothing.” He then went on to describe his training, where he participated in mock shooting events where “we just listened to other people being murdered across the hallway, and you can’t do anything.” Seitz says an active approach like ALICE makes you “feel like you mattered.” Above all, the program stressed action and preparedness. “To sit is to die,” Seitz said, “preparedness is safety.”

Houston Police Chief David Breault, also in attendance, spoke regarding the program. “This is the world we live in now, and no one’s immune.” Breault also mentioned that teachers do not have the mindset of “Now I have to be a warrior,” so the ALICE training brought by Seitz has been helpful in raising preparedness and helping him feel “very empowered… I feel like, okay, I can do this.” Seitz again cited the 73% statistic on gunshot wounds, saying “if I give you guys $1,000, and I said 73% of the time you’re gonna win, you’d play all day.” Seitz went on to dispel depictions of gunshot wounds in the media, saying “if we believe what the media wants us to believe and what movies… portray onto us, we’re not even gonna fight.” Seitz also related a conversation he’d had, where he’d told a self-professed non-violent person that “when I tell somebody… you’re never gonna see your daughter again, you’re never gonna see your son again, your daughter and your son will grow up without a mother if you don’t deploy this stuff. And… it hits home.”

The board thanked Seitz for his presentation and asked the officer about possible further training for school personnel. Seitz departed the meeting to applause, and the board then discussed a steady enrollment projection, heard the school facilities report, and approved three items of old business. The board then approved the sending of audit services requests to several local firms to ensure the district got its best possible option. The board moved to adjourn at 7:49 p.m., and will meet again at 6 p.m. on Thursday, February 2, 2017.