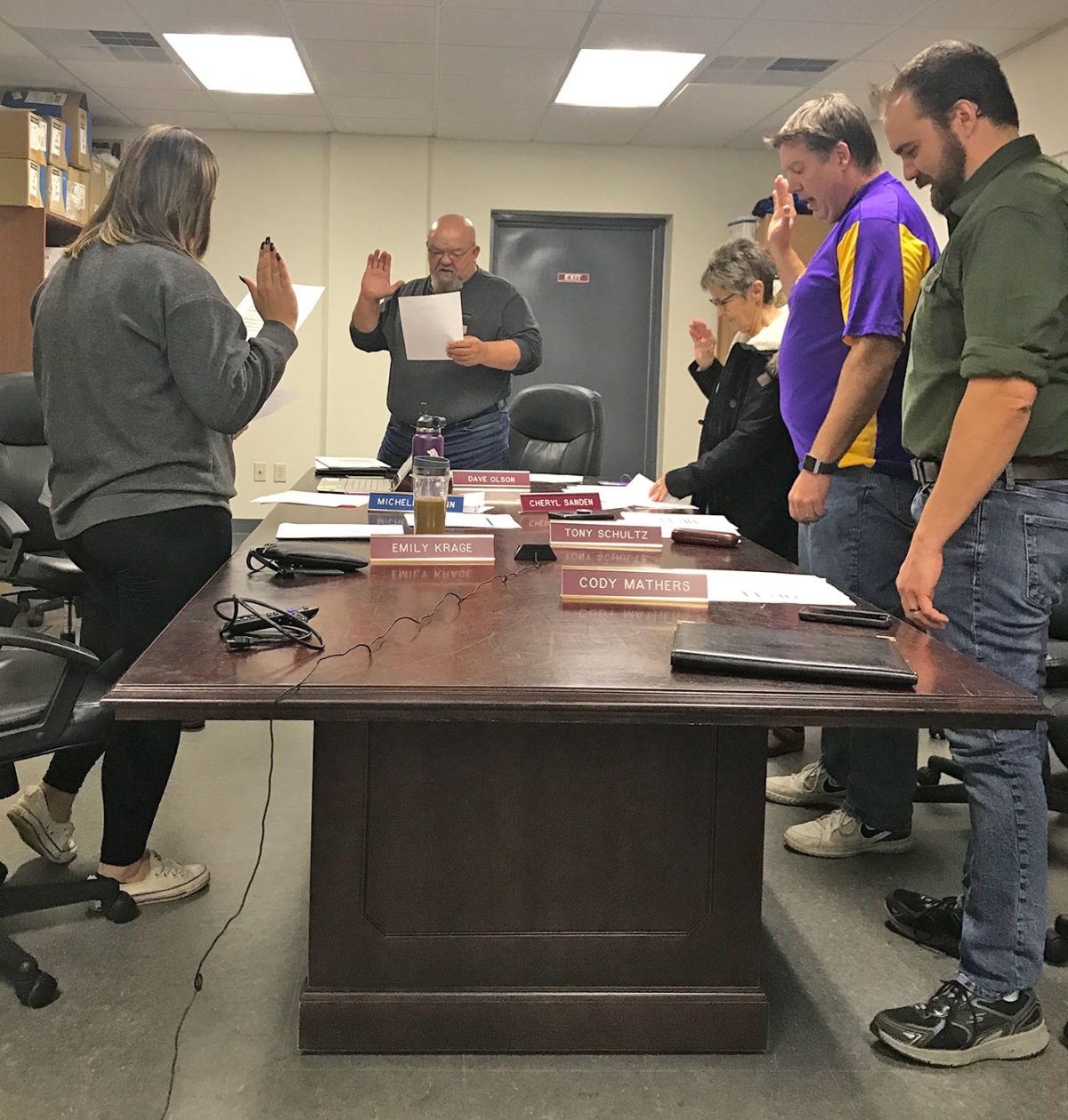 After being sworn in, the Houston council canvassed  the recent election results in a short special meeting prior to their regular meeting November 14. With a total of 382 in-person voters and additional mail-in and early voters, Scott Wallace was elected as the new mayor, and Zeb Bauman and Steve Westby were elected to the council. The new council members will join the council at the January meeting. City Administrator Michelle Quinn reported there were no incidents and votes were delivered to the county around 9:30 p.m.

The Houston City Council spent most of their regular meeting discussing upcoming CIP (capital improvement projects) for 2024. Mike Bubany of David Drown Associates as well as Matt Mohs attended the meeting to provide their expertise.

Cautioning that Houston needed to make sure operational spending didn’t outpace income, Bubany commended the city on yearly putting away money into infrastructure funds. Bubany noted that water bills for the average household has been $60 per month since 2023 and the sewer bill for a 5,000 gallon user has been $69 per month since 2022. The debt per capita has been dropping since the city has been doing a good job paying off principal on loans.

The council prioritized Spruce Street to be done in 2025. The city has PFA (Public Facilities Authority) grant financing that must be used by 2025 of $300,000. Spruce Street will be done in cooperation with the county.

The other street that will be done with another governmental entity, the state, is the Cedar Street project which is planned for 2030. This project will be ineligible for nonutility funding. Sewer and water rates would need to pay for the streetwork. Bubany pointed out that the reserves in water and sewer funds will help the city when they are seeking to obtain loans for the projects.

PWD Randy Thesing shared that the water mains that need to be done on Jackson Street will be taken care of when Spruce Street is done, thus buying time before Jackson would need to be done.

If Jackson, Chase, and Grant were all included in budget projections, the rates would need to be raised yearly by 7% for water and 4% for sewer, with an expenditure of $19 million over the next 10 years. The whole room agreed this would not be possible.

City Administrator Quinn stressed that the council had no choice but to do the Spruce and Cedar Street projects since they were to be done in conjunction with the county and the state. Quinn reminded the council that the budget at this time does not include the hoped for improvements to Stoddard Street, which would enable the sale of some city lots.

Bubany will provide the council with copies of two sets of graphs and spreadsheets to consider before the council makes a decision. One will include just the Cedar and Spruce Street projects; the other will have projections for Jackson, Chase, and Grant Street as well.

The city will keep the levy as is in order to have more funds available when needed for Cedar Street. Matt Mohs informed the council that design and planning needs to begin a year ahead of time; this would be the spring of 2024.

The council closed the meeting to consider an asking price for the old community center building. During that closed session, the council authorized Quinn to negotiate with the interested party after she reaches out to the city attorney to clarify the appropriate process.

• Heard from Matt Mohs that the wastewater treatment plant was in operation and working as it should; there were no bills for the project with a final punch list being completed;

• Approved liquor licenses for JT’s and the American Legion contingent on the Legion submitting the necessary paperwork;

• Approved the health benefits plan for employees for the year and tabled the COLA for employees until more information is received;

• Hired Emily Krage, the only applicant, as the Summer Rec Director with a $4,000 stipend;

• Gave city staff the authority to interview and hire one of two applicants for the $10.50 per hour Nature Center assistant position.

The next Houston City Council meeting will be December 12 at 6 p.m. in the city hall council chambers; the public is welcome to attend the meeting. A public comment period is provided during the meeting for people who wish to address the council.