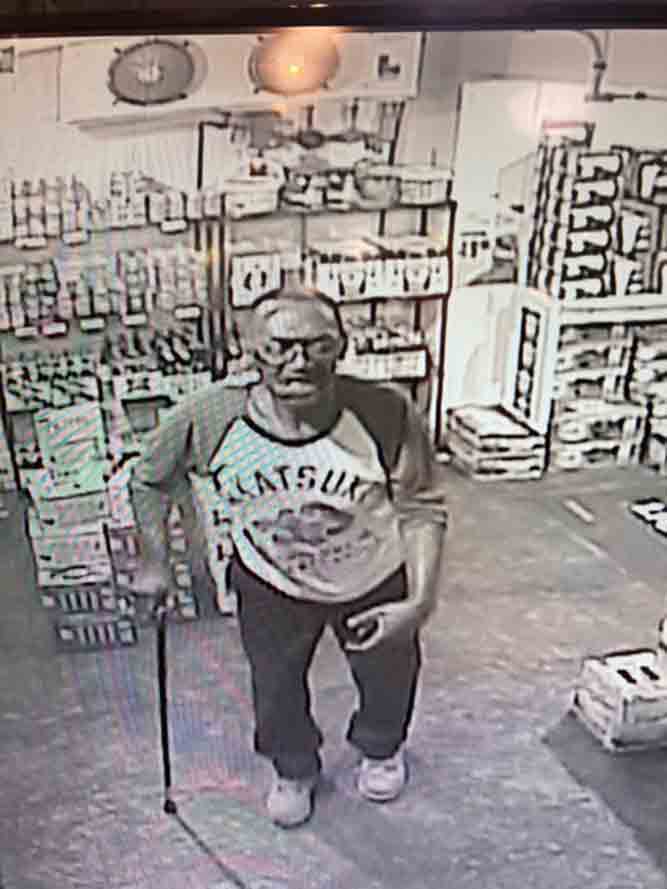 Thursday, September 15, was a beautiful sunny day in the charming little town of Lanesboro, Minn., like many days in the small community nestled between the bluffs.

Lori Bakke, owner of Granny’s Liquor, was getting ready to open her store for the day.  She had gone out in front of her store on Parkway Avenue, and watered her plants and swept the entryway.

It was a busy morning, with product vendors showing up like usual.  Shortly, after one of her vendors left the store, a man walked into her store.  Since Lori hadn’t seen the man in her store before, she told him “If you need any help, I’ll be happy to help you!”

He was a black male with a medium build, approximately late 50s or early 60s of age, and walking with a cane.  He went up and down the two isles of the store, and finally ended up back by the “beer cave” at the back of the store.  Once back in the beer cave, he asked Lori if she could help him with some questions he had about products back in the beer cave.  So, Lori went back there to help him.  He had lots of questions about the different products in the cooler.  And, then he began to share a story about how he was trying to get his friend to come visit Minnesota, because it was so nice here.  He then talked about how his friend had just lost his wife.  While he shared his story, he stood in Lori’s view from the back of the cooler glass doors so she was unable to see that there was another man who had entered the store.

While the man continued to distract Lori with his stories, trying to keep her from leaving the cooler, security cameras later showed the other man was sizing up the store.  At one point, Lori said, “I’m getting a little cold, so I’m going to have to step out of the cooler.”  She was dressed for a warm summer day, wearing shorts and a t-shirt.  As she was attempting to exit the cooler, the man with the cane asked her another question, which kept her from leaving the beer cave.

Lori said that it was probably a blessing in disguise.  If she would have left the beer cave at that moment, she would have encountered the other man behind the counter stealing her bank deposit bag, which could have been a much worse situation.

She had no idea what was happening at that time, because she never had any reason to be suspicious.  The man with the cane left shortly after Lori exited the beer cave.  Before he left the store, he asked, “Are you gonna be open for another 30 minutes?”  This was at 11 a.m. on a Thursday morning.  Since Granny’s Liquor had just opened for business at 10 a.m., Lori said they would be open until 9 p.m. that evening.

A couple of minutes after the man with the cane left her store, a friend stopped by to visit.  It was Olivia with her young children.  And, then a customer came in about 10 minutes later, and wanted to pay for product with cash.  She went to look for her deposit bag, and it was gone.  At first, she thought she had misplaced it.  Her husband David arrived, and they started to retrace steps that morning.  Lori explained who had visited the store that morning, and David prompted Lori to start looking at security camera footage.

There it was. While Lori was in the cooler, distracted by a conversation with the man with the cane, the other man was behind the counter opening the cash drawer and file cabinets to see what he could steal.  The other man, a black male with a larger build, wearing a hat and sunglasses, walked away with the deposit bag, full of more than $1,100 in cash.  Lori felt fortunate he didn’t grab the other bags in the filing cabinet that contained lottery and raffle ticket money.  Her faithful dog Oakley was standing behind the counter, waging his tail while the man cased the place.  But, Lori said even Oakley knew something wasn’t right, as he stopped waging his tail after he saw the man was digging around in filing cabinet drawers.

After David and Lori realized they had been robbed in broad daylight, about 15 minutes had passed since the two thieves had exited the building with her deposit bag.  She immediately called the police, and they arrived as quickly as possible.  By that time, the two men were well on their way out of Lanesboro.

The little town of Lanesboro, a place that resembled the innocence and purity of a town like Mayberry, was shocked.

Since that day, Lori has been busy.  She already had security cameras, but now she is adding greater security measures.  Lori has been busy filling out paperwork for insurance to recover the stolen funds.  And then there are the bank accounts.  Since the deposit bag contained her deposit book, the thieves could steal her banking information.  She went to her bank right away, closed her bank accounts, and opened new accounts.  That’s all quite a hassle.

“I’m still struggling with the violation of what happened,” shared Lori.  The staff at Granny’s Liquor is definitely changing how they do things now.

Since the robbery, Lori has experienced an outpouring of community support.  She has had people tell her they are starting to lock up their house and their car.  So many people have been very trusting of their environment, thinking something like this could never happen in Lanesboro.  And, Lori is hoping other business owners hear about what happened to her and her business that day, so they can consider how they can take measures to prevent this from happening to them.