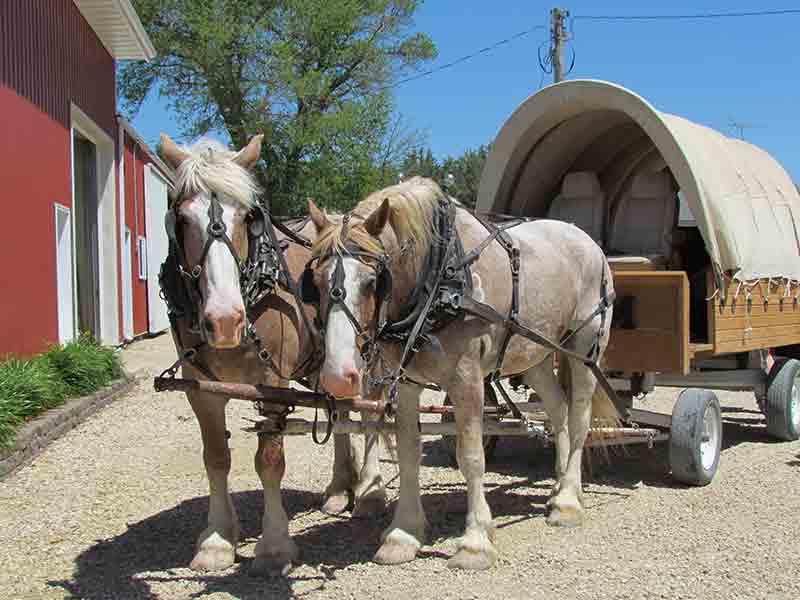 The Friendship Wagon Train has enjoyed over 34 years on the trail in Southern Minnesota and Northeast Iowa. Since the closure of Camp Winnebago five years ago, the funds raised go to Minnesota Special Olympics. Over the past three decades, the group has raised over a half million dollars. This year they estimate raising an estimated $20,000.

“The most we have raised in one year was $40,000,” assistant to the wagon master Monica Davis said.

One hundred percent of the funds raised support Minnesota Special Olympic programs. The Friendship Wagon Train does not use any donations for administrative fees. Participants pay for their own expenses and communities come together to provide a venue for overnight camping and feed the participants during the ride. Fire Departments assist by hauling water to the wagon train and filling up the group’s water tank.

The ride started in Kasson, Minn., on June 18 and wound its way through Hayfield, Waltham, Brownsdale, Austin, Rose Creek, Adams, LeRoy, and ended up at the Michael and Juliann Mueller farm outside of Lime Springs, Iowa, on June 24.

Every year the community is invited to come out to see the horses and visit with the riders. Donations are accepted the week of the ride.

Each day the group rides approximately 15-20 miles. On Wednesday, the route was longer due to a wrong turn. The assistant to the wagon master shared that there were a lot of tired riders at the end of the day.

There were up to 12 teams this year, whereas, in previous years, there have been over 20 teams participating in the ride. “Folks are getting older, and the cost of fuel to get here kept some home,” explained John Davis, the ride’s wagon master. Some teams join the ride for just a day or two.

About 10 horseback riders ride at the beginning and end of the wagon train. Their job is to provide traffic control.

Teams come from all over and many have participated for many years. This year there were teams from Minnesota, Tennessee, South Dakota, North Dakota, Illinois, Louisiana, Wisconsin, and Iowa. Michael Cunningham from Fairview, Tenn., stated, “This is my 19th trip up here.”

The teams of Belgians, Haflingers, mules, and quarter horses draw a lot of attention and get lots of loving pats from visitors.

There are no two wagons alike, some can carry a handful of people, and some are two-seaters. Some of the wagons have rubber tires, and some have wooden wagon wheels. There are wagons with wooden buggy seats, and some with car bucket seats making for a comfortable ride. One of the wagons was built from a manure spreader.

There are men and women drivers. One female driver is recent college graduate, Debra Hershberger from south of Mabel. Hershberger has been driving a team with her father for the past 10 years in the Friendship Wagon Train.

“There have been a lot of kids that have grown up on the train,” explained Monica. Stephanie, the gal riding with John and Monica joined the ride when she was 11. She is now married with children, the oldest being a teenager.

Dustin Davis, John and Monica’s son, participated in his first wagon train when he was six months old. His six-year-old is participating in this year’s wagon train.

Juliann Mueller shared that she and her mother started with the Camp Courage wagon train in the ‘70s and joined the Friendship Wagon Train when it broke off in the ‘80s. The fourth generation of the Mueller family is now participating in the train.

Monica mentioned that they are looking for someone to take over the reins. John started as a wagon master in 1985. Their son Dustin is trying to take it over, but he needs to get to the right point in his life as many hours are spent meeting with the organizations and planning out the route explained his mother. Cunningham proudly quipped, “He’s got big feet, but he does not fill his daddy’s shoes.”

Donations are being accepted until the end of August for the 2022 ride. Contact John or Monica Davis at (507) 365-8064 to donate or for more information on the ride. Checks payable to Minnesota Special Olympics can be sent to John and Monica Davis, 10106 60th Street SW, Byron, Minn. 55920.