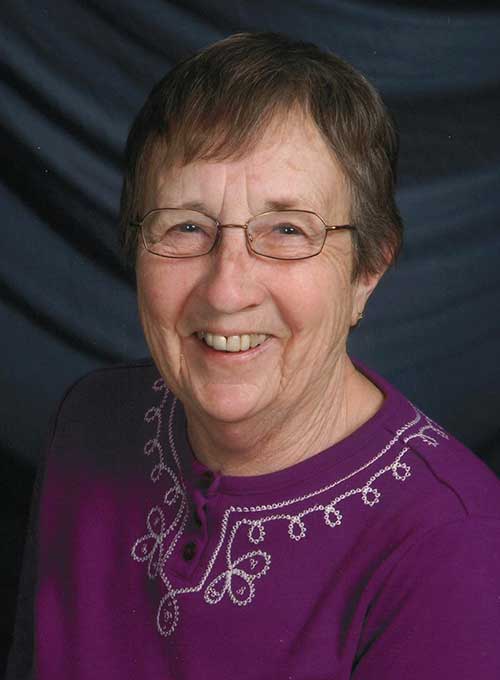 Esther Lou Kelly went home to Jesus on December 14, 2021, at age 80.Esther, born on May 14, 1941, to Dwain and Eunice (Leonard) Feller in Elkader, Iowa, immediately brought joy and laughter into the world. Esther grew up with her parents and two sisters, Mary and Pam. Esther graduated from Orange High School in Waterloo, Iowa, in 1959. After graduating, Esther worked making ice cream at Borden Soybean in Waterloo, Iowa. After Borden Soybean, Esther worked at Kroblin Trucking, as a dispatcher.
On December 5, 1969, Esther married Richard Kelly, a match truly made in heaven. Esther and Richard have two children, Bradley and Michael. Along with her family, Esther was involved in raising crops, hogs and milking cows. After farming, the Kelly Family pursued a career at the Harmony News. Their love for this grew into starting their own newspaper, the Fillmore County Journal, in 1985. In 1994, business expanded into Kelly Printing & Signs, and the Fillmore County Journal was sold. Esther put her hard work ethic, fast typing, love of chatting with customers, and niche for running sewing machine to work at Kelly Printing & Signs until retirement.
Being an avid member of Canton-Scotland Presbyterian Church, Esther loved the church and loved sharing the love and warmth of our savior, Jesus Christ. Our family was blessed to have Esther as the head of the family.
In addition to being a dedicated and loving wife, mother, grandmother, and great-grand mother, Esther also loved crocheting and quilting. She won numerous awards for her talents at the Fillmore County Fair throughout her years. Beyond making award winning crafts, Esther loved raising produce in her garden to cook delicious foods, including her renowned potato salad. Being a woman of all trades, Esther is remembered by her family by being a great fisherwoman, like her father. When Esther was caught relaxing, you could guarantee a sports program was on the television, her favorites being the Minnesota Twins and Lanesboro Burros.
Esther joins her parents Dwain and Eunice, sisters Mary Hatton and Pam Pauley, and niece Christine Freemon in heaven.
She is survived by her husband Richard, sons Bradley (Rita) and Michael (Krissy), five grandchildren: Andrew (Mindy), Carrie (Matt) Colbenson, Amy, Jared, and Ryan; and three great-grandchildren: Willow Kelly, Ryder Colbenson, and Fletcher Kelly; and many nieces, nephews, and friends.
The family requests that all flowers and notes are sent to Bethlehem Lutheran Church and donations directed towards the Chosen Valley Care Center.
There will be a visitation on Monday, December 20 from 5-7 pm and Tuesday December 21st from 10 to 11 a.m. at Bethlehem Lutheran Church. The funeral will be on Tuesday December 21 at 11 a.m. at Bethlehem Lutheran Church, with Rev. Kate Rupert officiating. Burial will be at MN State Veterans Cemetery in Preston.
Esther’s family extends a special thank you to Esther’s granddaughter Carrie Colbenson, niece Suzy Thorby, Seasons Hospice and the Chosen Valley Care Center Staff for the incredibly special care that was given during her last days.
Online condolences are welcome at rileyfuneralhomes.com