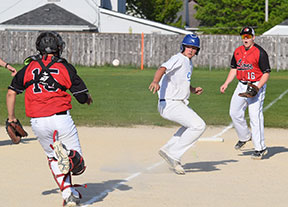 While the summer American Legion baseball season progresses with most of the same Spring Grove players, this is a look back at the 2021 school baseball season. The youngest and most inexperienced Spring Grove high school baseball team in program history finished with a 10-12 season record, one win short of an 11-11 break-even season for coach Chris Strinmoen, former two-time Lion MVP in his fifth season at the helm. Three of the losses came against section championship/state tournament teams – one game versus eventual state champion Hayfield and a pair of conference setbacks against state fourth-place Randolph.

The Lions were 8-7 in Southeast Conference action, finishing fourth in the nine-team race. It was a fourth straight winning SEC record. The boys earned a third straight home game for the playoffs and won a postseason game for the second straight season. It was a rebuilding season after winning the sub-section championship in 2019. With the pandemic, there was no 2020 season.

The Lions had one of the two highest team grade point averages (GPA) in Minnesota Class A baseball. Spring Grove and Lac qui Parle Valley were the only two Class A clubs receiving the Academic Gold Award.

Senior Isaac Griffin was announced as baseball Academic All-State – an individual honor only for seniors who achieved in the classroom as well as on the baseball diamond. The academic component is based on his GPA, cumulative through all four years of high school. He was the lone Lion baseball senior in 2021.

As a 10-12 record might indicate, the opponents had slightly better statistics, batting .271 to the Lions’ .256 batting average. Opposing pitchers combined for a better earned run average (.3.705) than the Lion mound staff (5.079). The opposition averaged 7.7 runs a game to Spring Grove’s 5.0 – greatly due to lopsided losses to the state tournament teams and section runner-up Lyle/Pacelli. In those five games, the Lions were outscored 69-7. In other 15 games Spring Grove outscored the opposition, 103 to 102.

Spring Grove won four of the five games decided by one run. There were four walk-off decisions, two each versus Fillmore Central/Lanesboro and Grand Meadow/LeRoy-Ostrander/Kingsland. When tales are told in the future, surely most memorable will be the two walk-off wins within six days over FC/L. In both cases, Brandon Jahnke had a base hit and was replaced on base by pinch runner Matthew Doering, who would score the game-ending run after Jaxon Strinmoen put his RBI-bat on the ball.

In the 2-1 home win against GMLOK, a Bulldog pitcher (with two outs) walked in both the tying and deciding runs. GMLOK would avenge that loss with an 11-10 walk-off win at Spring Valley. In both cases, the winning team trailed going into the final half-inning.

After injury had sidelined a sophomore and two freshmen, the team had three eighth graders in the starting lineup in the latter part of the season. The oft-used term “rebuilding” was an understatement. There was only one senior, pitcher/outfielder Isaac Griffin, who was also the lone returning letter winner from the 2019 sub-section championship season before COVID-19 canceled the 2020 season. His pitching prowess was greatly responsible for keeping a young, inexperienced team competitive. During 64-plus innings on the mound, the All-SEC hurler struck out 123 batters – the third best single-season strikeout count in program history and the most strikeouts in the last 36 seasons. He closed with an 8-1 win-loss record and a team-best 1.082 earned-run average.

Younger sophomore brother Caleb Griffin was a mainstay in both the infield and outfield and next in the pitching rotation before an injury removed him from the defensive lineup. He saw further action as a designated hitter. He received Honorable Mention on the All-SEC team after closing the season with the Lions’ best batting average of .344 and second-best ERA (3.566).

There were only two juniors; Jonah Udstuen started at second base. Outfielder Matthew Doering, who had not played organized baseball since grade school, saw action mostly as a pinch runner and scored the two most memorable, game-winning runs.

With only one senior and one junior in the starting lineup, much depended on the quick development of five sophomores, five freshmen and a trio of eighth graders. Besides Griffin and Griffin, four other pitchers saw significant mound duty.

Sophomore Logan Brumm played behind the plate and with 15 runs batted in, shared the team RBI lead with Caleb Griffin. Eighth grader Ezra Griffin started at catcher late in the season.

Backup freshman outfielder Braedon Solie scored the first run of the season at Houston and scored the game-winning, walk-off tally against Grand Meadow/LeRoy-Ostrander/Kingsland – both times as a pinch runner. Two talented freshmen outfielders, Elijah Solum and Jacob Olerud, missed most of the season with non-baseball injuries.

The team awards had not yet been announced before this article went to press.