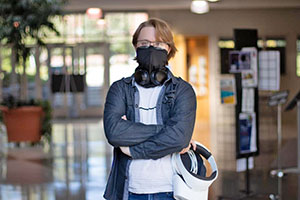 “With the passing of ages, the Gods of Mount Olympus have faded away until only two remain: Zeus and Hera. Now they are in danger of disappearing if they can’t recover the box of hope that Pandora removed.” -Finding Pandora X cutline, www.doubleeye.co/pandora.

Schmidt, a 2020 graduate of Luther College, majored in art and minored in visual communication, became interested in virtual reality development in 2018, and developed programming tutorials for the VRChat platform www.luther.edu/magazine/.

VRchat allows the developer to upload the environment and characters. He uploads one to two tutorial videos per month on YouTube.

Schmidt describes himself as 80% developer and 20% environment designer.

The YouTube videos are “a constant resume,” explained Schmidt.

Vaughan began his studies at Luther College as a computer programming major until one day, his advisor asked why he was not studying visual communication. It was then that Vaughan “connected the dots.”

Schmidt explained in layperson terminology that VR is a cross between generic programming and video games.

While a high school student at Fillmore Central High School, Schmidt liked using programs and playing video games. During his high school studies, the school switched to Mac computers and gave away their old computers. Vaughan quickly grabbed 10 computers, refurbished them, and gave them to his family.

Schmidt was not involved in theater in high school, but he did play in the pit band.

Schmidt’s advice to current high school students interested in theatre, programming, and/or VR, “Find a platform or product that you like. Focus on it and carve a path.”

What does the future hold for Schmidt? The day before the interview for this article, Schmidt had a job interview with HIKKY, a company out of Japan, for a junior programmer position. We wish Schmidt good luck and looking forward to following his career.

Schmidt continues working with Double Eye Studios as they update Finding Pandora X for the film’s North American premiere at the annual film and music festival, South by Southwest, in Houston, Tex., March 16-20, 2021.

Double Eye Studios does not have a brick-and-mortar studio, as everyone works remotely.

Last summer, Double Eye Studios received the reward for Finding Pandora X. Schmidt’s smile echoed through the phone interview as he described the feeling of winning at the Venice Film Festival last summer. It was “absolutely phenomenal.”

The Karen and Paul Schmidt family are farmers outside of Preston. The family raises hogs, corn, garlic, and asparagus, plus they host overnight visitors to their farm. Visitors can spend from three days to a week enjoying an interactive farm experience as described on www.vrbo.com. He has one younger brother who is a manager at O’Reilly Auto Parts near Des Moines. Schmidt explained that he and his brother are not similar, but they approach their careers in a similar fashion. The brothers make sure their hobbies are close to what they do as professionals. His brother took lawn mowers apart as a teen, and Schmidt treated VR as a hobby. Schmidt explained that “Having a genuine interest in what you do is critical.”

Where do you see VR in five years? VR hardware developed over the last five years are now outdated. For example, headsets are basically unusable. Audio microphone and headsets are now entirely stand-alone. In the next two years, accessories will not be tethered. Headsets will get smaller and smaller like a thicker pair of glasses. Watch for handheld remotes, cameras on your headsets. Schmidt emphasized that just over the past two months, it has been exploding. You have wearable accessories — other BCI brain-computer interfaces – a sense that you would attach to yourself. Communicate back and forth with your brain. According to Schmidt, Valve’s CEO, Gabe Newell, makes VR more appealing than sci-fi horror.

After reading this article, are you Fillmore County Journal readers ready to rush out and purchase a VR headset? If so, here is a tip from the expert. The Index headset is top of the line at the cost of $1,000.