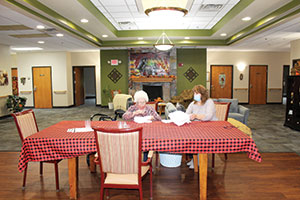 When Traditions of Preston first opened in 2009, it started out as an assisted living center with a memory care unit, but at that time, none of its residents were in need of a memory care facility and there wasn’t much interest in it. Rather than let the rooms sit empty, the space was changed to a regular unlocked assisted living unit instead.

Eleven years later, things have changed. As residents began leaving Traditions for memory care units in other facilities, the new management company, Cornerstone Management Services decided that it was time to convert the unit back into its original form. Thankfully, it wasn’t a big job. “All we had to do was put locks on the doors and close them along with a few other minor adjustments,” Manager Andrea Atwood explained. “It was pretty nice that it was already set up.”

Atwood had worked at Traditions of Preston from its start up until 2017. After taking a three-year leave, Cornerstone, which took over management of the facility on July 1 of 2020, asked her to return. “When they called me, it wasn’t too hard of a decision to come back here,” she said. “My heart’s just for the elderly and especially for the dementia residents.”

While the work on the interior of the unit has been completed, the outside courtyard is still in progress. Rustic Rose Lawn and Landscaping from Spring Valley has been working to get it ready for residents to enjoy. They’ve added lots of bushes, trees and flowers to brighten up the space and benches will be installed later. A fence will be put up before the courtyard can be used to ensure the safety of those using it. The assisted living residents will continue to use the same patio they did before while the fenced courtyard will be a dedicated outdoor area for the memory care residents.

The Traditions of Preston memory care unit officially opened on October 1, and Atwood has already been receiving inquiries about it from interested people. “We had a need in this community,” she said, explaining that Preston, Harmony, and Lanesboro have under-served communities when it comes to care for the elderly with dementia and Alzheimer’s.

The families of current residents are also happy about the new opening as it means their loved ones can stay in the same place instead of having to be moved elsewhere. “That’s really been a nice transition for the families,” Atwood said. “We hope to provide care for them to end of life.”

For more information on Traditions of Preston, visit traditionsliving.com or call (507) 765-3837.