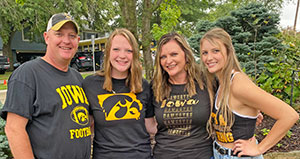 If there ever comes a day

when we can’t be together,

keep me in your heart,

Darian’s parents, Karla and Dave O’Connell, and her two sisters, Kaylee, 20, and Kortni O’Connell, 16, and Darian’s extended family keep her memory alive. On the upcoming anniversary of Darian’s death, the family will spend time together and carve pumpkins.

Karla shared, “You never want your child’s memory to be forgotten.”

The young family was moving back to Hesper from Des Moines. They had purchased a fixer-up house, and Karla planned to be a stay-at-home mom. While Karla was in Des Moines finishing up her last week of work, her husband and daughter stayed at her parents’ home in Hesper.

Her parents burn wood to heat their home, making it hotter in the house, and the baby was sleeping in bed with her husband. Both of which many parents have done for decades.

Again, as is familiar with first-time parents, Karla called her parents and husband throughout the day to check on her daughter and did not get any answers. She tried not to worry and went back to what she was doing. Karla’s mom, dad, and husband drove 3 ½ hours to Des Moines to tell Karla the news about her daughter.

When she returned from Des Moines, she went straight to the hospital in Decorah, where she held her daughter one last time and kissed her goodbye.

Dave and his family finished packing up the house in Des Moines and moved their belongings to their new house in Hesper.

October is Safe Sleep Month. Safe Sleep is as easy as A, B, C: Alone, Back, and Crib.

According to the Centers for Disease Control and Prevention (CDC), “Each year, there are 3,400 sudden unexpected infant deaths (SUID) in the United States. These deaths occur among infants less than one-year-old and have no immediately obvious cause. The three commonly reported types of SUID include the following. 1. Sudden infant death syndrome (SIDS), 2. Unknown cause, and 3. Accidental suffocation and strangulation in bed. In 2019, there were about 1,250 deaths due to SIDS, about 1,180 deaths due to unknown causes, and about 960 deaths due to accidental suffocation and strangulation in bed.

The American Academy of Pediatrics’ risk recommendations have proven to reduce SIDS deaths and may prevent accidental sleep-related infant deaths.

• Always place baby on their back to sleep for every sleep, naps, and nighttime.

• Baby should always sleep in a safety-approved crib with a firm mattress and tight-fitting sheet only. Sitting devices, such as car seats, strollers, boppy pillows, swings, infant carriers, and slings, are not intended for routine sleep.

• Share a room, not a bed with baby. It is recommended that baby sleeps in the parent’s room, close to the parent’s bed, but on a separate surface designed for baby, ideally for the first year of life, but at least for the first six months.

• Keep soft objects, loose bedding, and unfitted sheets away from the baby’s sleep area to reduce the risk of SIDS, suffocation, entrapment, and strangulation.

• Consider offering a pacifier at nap time and bedtime, after breastfeeding has been estab-lished.

• Avoid smoke exposure during pregnancy and after birth.

• Avoid overheating baby. Keep baby warm by using a wearable garment instead of blankets. This keeps baby comfortable and keeps baby’s face uncovered at all times.

• Infants should be immunized in accordance with recommendations of the AAP and Centers for Disease Control and Prevention.

• Avoid alcohol and illicit drug use during pregnancy and after birth or when caring for infants.

• Supervised awake tummy time is recommended to facilitate development and to minimize the development of positional plagiocephaly (flat spots on baby’s head).

Karla was an RN before becoming a mom. Due to her profession as a nurse, Karla stated that she was very aware and educated about SIDS, demonstrating that SIDS can happen in any family.

Today Karla works as a health facility surveyor/RN for the State of Iowa. After the tragic death of her daughter, Karla started working for Public Health after interacting with them as a grieving parent. Working for Public Health, she had the opportunity to tell her story and educate parents about SIDS and be there for other parents who have lost a child.

In a small community, the community comes together more than they would in an urban setting. Karla was breastfeeding at the time, and it was physically excruciating not to be nursing anymore. So, in the middle of the night, her mom Diane called the grocery store in the neighboring town of Mabel, and the store owners opened so the mother and daughter could purchase a head of cabbage. Cold cabbage leaves are used to relieve the pain.

“A parent shared that a funeral home in Decorah does not charge for the casket,” explained Karla.

The Iowa SIDS Foundation offers a Peer Contact for parents and grandparents that have lost a baby to SIDS.

Karla mentioned that it is a dual impact on grandparents who grieve with their daughter or son over their loss, and grieve over the loss of their grandchild.

In 1999 Karla and her husband attended a support group for grieving people at the Gundersen Hospital in La Crosse. The group they attended primarily had people who had lost elderly folks. Next, it recommended they participate in the infant support group in White Hall, Wis., another 1 ½ hours away. The parents also attended the Iowa SIDS symposium a couple of times in Des Moines.

Visit the Iowa SIDS Foundation at www.iowasids.org and the Iowa Department of Public Health at www.idph.iowa.gov for a list of resources.

Visit the Minnesota Department of Public Health at www.health.state.mn.us and the Star Legacy Foundation at starlegacyfoundation.org/mncsid/ for a list of resources.

Visit the Wisconsin Department of Health at www.dhs.wisconsin.gov and the Children’s Health Alliance at www.chawisconsin.org for a list of resources.

“Enjoy every moment with your little ones,” advises Karla.