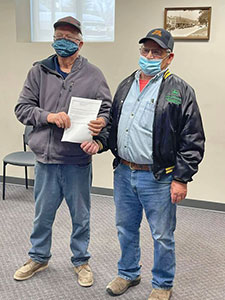 The U.S. Department of Veterans Affairs released the State Home Construction Grants for 2021. Governor Tim Walz announced on March 30 that the three proposed new State Veteran Homes will each receive federal funding this year. The veterans home in Preston will be the only skilled nursing home for veterans in southeast Minnesota. Walz said, “We are pleased to be able to expand our State veterans homes into three new communities to serve our elderly veterans living in all corners of the state.” The three new projects will receive a total of more than $80 million in federal Veterans Administration funds. About $21 million of that will be for the Preston home.

This is the result of years of planning and work by local officials and volunteers. The homes will now become a reality in Preston, Bemidji, and Montevideo.

Local veterans homes committees in Preston and Spring Valley began their efforts to have a State Veterans Home in Fillmore County as early as 2013. The Preston committee was co-chaired by Ron Scheevel and Don Gildner. Twenty to thirty committee members volunteered to serve over the years, including veterans, local legislators, Preston staff members, and community members. A tough decision was made by the county board to back Preston as the site for the veterans home. Fillmore County contributed $300,000 to the project.

Finally, on May 20, 2018, very late in the legislative session, a $825 million public works construction bill passed. Thirty-three million dollars were included in that bonding bill for homes in Preston ($10.2 million), Bemidji, and Montevideo. Governor Mark Dayton signed the bill into law later in the month.

In December of 2018 the Minnesota Department of Veterans Affairs gave a predesign presentation to a crowd at the Servicemen’s Club. Wold Architects and Engineers and Perkins Eastman were hired to design all three homes. Each veteran is to have a private room and

bathroom. The intention is to make the atmosphere homelike, as opposed to institutional. By this point it had been decided that the Preston facility would have 54 beds. The main access to the facility is to be from Highway 16. It has been estimated that 80-90 full-time job equivalents will be created.

The Preston City Council unanimously approved the purchase of 16.6 acres of land from Robert Doherty at a total cost of $232,400 during their March 18, 2019, meeting. This hilltop location for the new State Veterans Home is unique to the Preston area and will feature scenic views with surrounding oak trees. An option agreement was also approved between the city and the state of Minnesota, which will allow the conveyance of the property from the city to the state. Preston city administrator Joe Hoffman said it will be signed over to the state when the time is right.

The application for federal money (65% of the total cost) was sent in last spring. Funding last year included very little for new facilities. Nationwide, only one new veterans home was built from last year’s funding, along with some reconstruction and maintenance of existing homes.

It takes a big allocation to fund all the deserving projects. That is what happened this year. With the recently passed American Rescue Plan Act of 2021, about $570 million was provided for veterans homes projects nationwide (for new homes, reconstruction, and maintenance).

Rep. Greg Davids recalled that the MDVA was only looking at one new veterans home in 2018. The then chairman of the Veterans Affairs Division Committee Bob Dettmer suggested going for all three proposed projects. The rest is history; state funding for all three was in the bonding bill. Davids said it was a heavy lift, but “when many people are lifting, it makes the lift lighter.” Our veterans have served us and now it is our turn to serve them. There was also support from surrounding counties as this home will serve 15 southeast Minnesota counties. Davids is working on a bill to help Preston with the cost of the road and some other amenities that have been cut back. Regardless if he is successful, the project will go forward.

Commissioner Duane Bakke said it is “a great thing for veterans and their families.” Family members will be able to visit their loved ones without traveling as far. This was a great effort by a lot of people. On behalf of the county board he thanked all of those that worked to get this accomplished. The board will continue to work with the VA through construction and operation.

Hoffman called it “a great day for Minnesota and a huge day statewide for veterans.” This is the result of a years long team effort. Committee co-chairman Ron Scheevel said he was certainly pleased with the news. He noted that once the state takes hold of the project it controls everything, including how the facility is built. Local funding that has been raised for the project is being held in escrow at F & M Bank and that will eventually go to the state.

Scheevel said it has been “quite a journey.” It has been a joint effort. He praised the current management of the Minnesota Department of Veterans Affairs, saying, “MDVA Commissioner Larry Herke is a great guy and a straight shooter.” Scheevel also credited Rep. Greg Davids and Senator Jeremy Miller for their efforts to secure state funding. Former Preston EDA director Cathy Enerson also deserves credit, as the EDA “went the extra mile.”

Hoffman added with this announcement, it has been a great day for Gildner and Scheevel and others that made many trips to St. Paul to testify before committees. Volunteers were there telling their stories, without which this effort would not have gone anywhere.

A lot of different parts had to come together. Hoffman said it is a three-legged stool. More than $1 million was raised from individuals, the county, other groups, and events. Preston donated the property. Miller and Davids helped by working to get state funding. The final leg was the federal funding.

Herke reported the granting of the federal funding will allow us to move forward with construction. Construction could begin as early as this fall.

Herke has been the MDVA commissioner since January 2019. This has been the best day for veterans for a long time in Minnesota. All three homes is a “grand slam.” He believes there is enough flexibility in the budget to deal with increased material costs. Herke says he should be able to confirm that in a few weeks.

This was the second time the three homes competed for federal grant funding. Much more money was available for the VA in 2021. This allowed it to go beyond safety items and restoration of existing facilities. The funding has been conditionally approved and nothing should hold us back from going forward.

Herke thanked the people who worked with MDVA Deputy Commissioner Douglas Hughes and who helped with the design. He thanked  Rep. Davids who has been instrumental. He wanted to thank the communities also. It will be about 24-28 months before the State Veterans Home will open.

Herke said the state will need help with the hiring process to fill about 100 positions, some full-time, others part-time.

There is a unique feeling in a veterans home. It is a home with people who served; they do better together. Finally, he looks forward to working with the community.