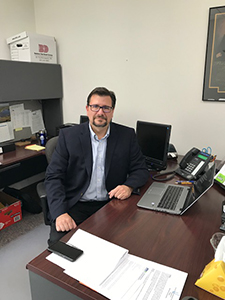 There’s an old saying that, “You end up where you’re supposed to be,” and Doug Grout agrees with that sentiment.  As the new Executive Director at Semcac, at the Rushford administrative location, Doug only started at the beginning of July.  But he already seems to be settling in well.

Another reason Doug is happy to be here, he said, is, “Semcac is very near and dear to a lot of communities in southeast Minnesota. The work is mission-driven. The employees have a strong sense of the mission of Semcac, and so that’s what’s made coming to work here very rewarding for me.” The mission statement of Semcac is “Empower and advocate for people to enhance their self-sufficiency by maximizing community resources.”

Doug pointed out that Semcac serves a main core area of seven counties in southeast Minnesota, as well as portions of a few more counties. He added that Semcac is a 501c3 nonprofit organization, providing a wide array of services, including Head Start, Senior Services, Community Development, Outreach & Emergency Services, Family Planning, and Transportation.

When asked about “the numbers,” Doug shared data showing that in 2018, Semcac assisted nearly 25,000 unduplicated individuals, and enjoyed over 72,000 hours of volunteer service.  Semcac currently has partnerships with almost 1,000 other organizations, and was awarded a “Best Places to Work” award from Workforce Development & Personnel Dynamics Consulting. Semcac operates 44 Senior Dining sites in 11 counties, and offers Meals on Wheels in 39 rural communities. Energy Assistance applications were received from over 6,000 households in 2018.

Regarding his own background and career path, Doug said he was born in Iowa, growing up there and in Nebraska, but added that, “My heart is here and my house is here (in southeast Minnesota). He went on to explain, “I received a bachelor’s degree from the University of Northern Iowa, and from there I worked at a small development corporation in southeast Iowa for a few years, and matriculated my way to Semcac,” where he worked as the Housing Services director.  He later moved to Brainerd, where he worked at the Housing & Redevelopment Authority.  He later moved to the Twin Cities where he first worked at the Minnesota Housing and Finance Agency, then took a position for the City of Bloomington, for their Housing & Redevelopment Authority. He added, “I’ve been with the City of Bloomington for 6½ years. I’m finishing up this month. I love the city of Bloomington, it’s been a great opportunity for me, but when the opportunity to work for Semcac, and also equally importantly, to move back home, my wife and I live in Brownsville,… was too good to pass up… It’s great to be back.”

Doug said he was pleased to find that a few staff are still working at Semcac from when he was there just over twenty years ago, and he’s been impressed with the dedication of those who work here.  When asked what he sees in the future for Semcac, Doug replied, “Balancing the efficiencies that technology can bring… but also factoring in the very important point that there is no replacement for dealing with someone one on one.”

When asked to point out a few highlights about Semcac’s services, Doug mentioned the current “Open your Heart to the Hungry and Homeless” campaign running through the month of July, which involves all four of Semcac’s food shelves, in Kasson, Preston, Rushford, and Caledonia.  He also mentioned the new transportation building that is being constructed in Kasson, which he said will be opening later this summer.  Semcac’s Head Start program is now accepting applications for the 2019-2020 school year.  Also, Doug mentioned that interested citizens can sign up for updates and newsletters by texting “Semcac” to 22828, and can keep up with Semcac on social media.