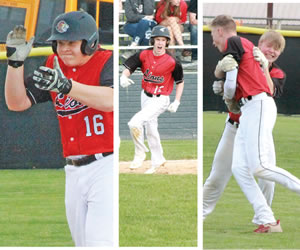 “Just eerie,” was how Spring Grove baseball coach Chris Strinmoen described the second walk-off win over Fillmore Central/Lanesboro on the same field within six days. The same three Lions played exactly the same three roles in both remarkable, celebration-inducing sequences. The second decision, a 2-1 Lion win, came in the May 31 section opener in front of a great crowd at Blayne Onsgard Memorial Field with No. 6 seed Spring Grove hosting No. 11 seed FC/L. The season ended for the Falcons (3-17), while the Lions advanced into the double-elimination portion of the playoffs.

Five days after closing the regular season with a loss at Southland, the Lions met the No. 3 seeded Rebels again in a June 3 playoff rematch at Austin – a 2-0 pitchers’ duel defeat that dropped Spring Grove into an elimination game with No. 7 seed Rushford-Peterson the same evening.

With the young and inexperienced Lion pitching rotation stretched to the limit, the season ended with a 14-8 loss to the Trojans and a 10-12 season record. The top Spring Grove hurler, Isaac Griffin, had too many pitches on Monday against FC/L to be able to go to the mound again for either of the two Thursday games. With sophomore Caleb Griffin unavailable due to injury, freshman Jaxon Strinmoen had become the primary back-up pitcher and tossed a stellar three-hitter (no earned runs) in the loss to Southland.

“This game can be so interesting and strange at any given time,” said Coach Strinmoen. “When our guys came up to bat in the bottom of the (final) seventh, they were already talking about how the batters coming up were the same as the last walk-off we had against them. I think that gave them some confidence.

“Brandon Jahnke led off with a huge double to centerfield that got us going. I chose to pinch run Matthew Doering for him again. After (Doering) moving up to third base with one out, Jaxon came up to bat in the same situation as the week before. This time he left no doubt with a deep drive to left that was well out of range of the outfielder. Walk-offs are such an exhilarating feeling to be a part of, but to see it happen twice within a week, against the same team with the same players involved was just eerie.

“I also have to mention the remarkable performance Isaac Griffin put in on the mound. He’s been our rock all year, and when we needed him the most, he stepped up and delivered again.” Griffin walked only one batter and struck out 15 (15 of the 21 outs), closing the season with 123 strikeouts, the most in 42 years and the third-best strikeout season in Lion history.

Both teams scored a run in the first inning, and then it was shutout city for five and half innings until the walk-off conclusion. The Falcon score was unearned with the lone Lion error and a two-out RBI single by FC/L pitcher Cooper Ferrie. Then the first Spring Grove batter Isaac Griffin was hit by a pitch, stole second base and would score on a ground-ball fielders’ choice.

There had been only three hits in the game (FC/L 2, SG 1) until each team added two hits in the final inning. FC/L threatened in the top of the seventh with two hits moving runners to second and third base with only one out. A squeeze bunt went back to the mound where Isaac Griffin was able to trap the lead runner between third base and home plate.

Ferrie, who ended up with a three hitter, had allowed only one hit going into the bottom of the final seventh inning. But the lead-off double by eighth-grader Jahnke, a wild pitch and the RBI-single from freshman Strinmoen sent pinch runner Doering to home plate for his second game-winning score in six days.

The Falcons had one more hit (4 to 3), but the Lions had one more run. Both pitchers went the distance with Ferrie striking out six while walking only one. Since Spring Grove resurrected the baseball program in 2016, the Lions have now won three out of the five games versus the Falcons.

While Strinmoen was tossing a three-hitter with seven strikeouts and only two walks, Rebel ace Harrison Hanna pitched a one-hitter and walked no one. Jonah Udstuen was the only Lion base runner with a two-out single in the third inning and reaching base on an error in the sixth.

It was scoreless until the fourth inning when Southland scored without a hit – two hit batters and an error. The Rebels (15-5) added another unearned run without a hit – two walks, a hit batter and an error. None of the three Southland hits led to a run.
“I knew that if Jaxon could throw strikes, Southland would have a hard time hitting his funky delivery and his slider,” said Coach Strinmoen “He turned in a wonderful performance, really frustrating the Rebel hitters. He got himself into some sticky situations with some hit batters, but he always managed to wiggle out of it with minimal damage.

“Both runs were unearned, which was too bad, but we weren’t getting anything done at the plate either. I have to tip my hat to Harrison Hanna, who pitched a gem against us. If we could have gotten anything going, we would have had a shot at the upset. But he held us in check and kept us off the bases. Tough to lose, but Jaxon’s performance gave me hope for our pitching staff for the next few years.”
Since the Lions brought back baseball in 2016, the Rebels have now won three of the five games versus Spring Grove.

Rushford-Peterson 14, SG 8
After a pair of pitchers’ duels, it was an offensive finale in the section elimination game. The Lions out-hit the Trojans 12 to 8, but R-P had three of the four extra-base hits. Grove pitchers issued six more walks than did Trojan hurlers, and there were eight Spring Grove errors.

Rushford-Peterson (8-15) scored five runs in the first inning with only two hits. The Lions replied quickly with four runs on five hits. But that would be as close as Spring Grove would get as the Trojans scored in each of the first five innings.

Eight different Lions had a base hit. Jahnke batted 3 for 4 with a double while driving in two runs. Strinmoen and Isaac Griffin each went 2 for 4.

“It was too bad we had to see our season end,” said Strinmoen. “We just ran out of pitching and couldn’t slow down R-P. We did a nice job battling back with some runs each inning, but we could not put up a zero on the defensive side. We had a couple injuries spring up on us too (outfielder Elijah Solum, catcher Ezra Griffin), which made things more difficult. We were grateful for all the fans that traveled out to Austin to support us,”

The teams have split their four games since the Lions revived their program in 2016.