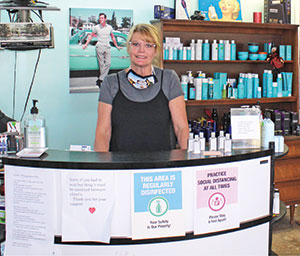 Sally Gibson has known that she wanted to be a hairdresser since she was in eighth grade. After high school, she attended a beauty school in Rochester and then worked in Rochester at a hair salon for the next 20 years. Things changed though when her family moved to Preston into a house that already had a salon built into the basement. She had planned to retire from hair dressing and stay home with her young son, but the opportunity was too good to be missed. She fixed up the salon and opened up Sally’s Hair to Dye For from her home.

Things were going well until her house was designated as one of the homes that needed to be removed for the big Highway 52 construction project. She decided that it was time to take her salon in a new direction, purchased a corner storefront at 100 Main Street SW in Preston in 2003, and has been there ever since.

Gibson has been in business in Preston for 20 years now, which includes the time with her home salon. Although she enjoyed working from home, she has noticed a few advantages to having a dedicated building for Sally’s Hair to Dye For. One is that she is able to leave work at the end of the day while having a business in her home meant that she never really felt like she was done. Another advantage is the visibility she has in the community that comes with having a building versus working from her home.

When Gibson first opened Sally’s Hair to Dye For on Main Street, she was met with some negativity from people who told her that she wouldn’t last a year in business. “I’ve lasted 20,” she laughed. She has a loyal customer base with clients who return to her frequently for their salon needs. She stays busy enough that the majority of her appointments are scheduled rather than walk-ins. Gibson offers a variety of services which include all styles of haircuts, colorings, perms, pedicures, and manicures. “I like the variety,” she said. “I don’t think I could just cut hair all day.” She makes it a point to never stop learning and growing in her business, frequently taking online classes. Some of the aspects of having her own business that she especially enjoys are trying new things and getting to know her clients.

Gibson has never had an employee and plans to continue running her salon on her own right up until retirement. “I can run it the way I want to run it and I can cater to the client much more,” she explained.

With COVID-19, the stress of owning and operating a business has been increased significantly. Gibson had to change the way she runs Sally’s Hair to Dye For with extra time for sanitizing in between clients, asking people to wait in their cars for their appointments, locking the door to only allow one person inside at a time, and face masks for both her and her clients. “Wearing a mask all day is very tiring,” she said, explaining that having to talk louder and work harder to breathe can be exhausting. Due to sanitizing measures which take 15-20 minutes, she’s not able to book as many appointments each day as she used to. “So it’s not been fun, but I’ve been lucky,” she said. Her clients were eager to get back in her chair as soon as she reopened and for the most part, they’ve been very cooperative and respectful of the new rules.

Gibson’s advice to other women who are just starting a business is to make sure they have their finances figured out and to ask for help with that if needed. “Know your budget and always pay off your debt,” she said. “Follow your heart because if you’re trying to be someone else, it just won’t work.”

For more information or to schedule an appointment, call (507) 765-4773 or visit Sally’s Hair to Dye For on Facebook.