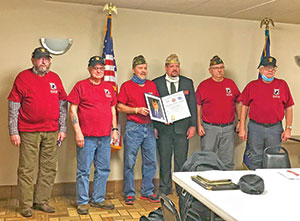 The Rushford VFW (Veterans of Foreign Wars) organization is celebrating its diamond jubilee this year — organized in 1946, shortly after the end of WWII, the VFW has been around for 75 years. On Saturday, February 13, the members of the VFW celebrated the 75 years at their meeting held at Stumpy’s Restaurant. VFW District I Commander Dave Thul from Owatonna joined the meeting to present the group with their Diamond Jubilee Award. Thul also presented them with a ribbon to be attached to the VFW’s flag with the words “Still Serving” embossed on it. The ribbon is similar to the battle ribbons or campaign streamers attached to units’ flag after they had been involved in battles. Thul complimented the group on their 75 years and encouraged them in the future with the hopes of a return visit in 25 years with a “new crop of veterans” to celebrate the 100th.

Rushford VFW commander and member since 1973-1974,  Maynard LaFleur, presented district commander Thul with a copy of Boots and Badges, Honoring Fillmore County Veterans, which had been donated to the VFW by the Fillmore County Journal. Thul, a self-proclaimed history buff, accepted the gift with great appreciation.

Senator Jeremy Miller had planned on attending the celebration as well, but his award had not been finished in time; he is now planning on attending  the group’s March 6 meeting to present it at that time.

When the VFW was first organized many of the members had been in WWII, but there were also members from WWI. As time went on many members joined who had been in Korea during the early ‘50s. The oldest members are Lupy Myhro and Rob Bunke, a member for 70 years; both men fought in WWII. The VFW originally met in an old school house in South Rushford; they went on to purchase the Love It Ice Cream Factory located in back of the current Tenborg Center in Rushford. With a lot of work from the dedicated members, they remodeled it into a post home and club.

Carrol Tudahl, a 55-year member of the VFW, took over as quartermaster from his uncle Harlan Johnson; he said that in 1983 the group was up to 139 members. The club was very active at that time. They would often have membership dinners and dances along with chicken ques and smelt fries. The money raised was given to seniors as scholarship and to both the Boy Scouts and Girl Scouts. Now the group usually has a smelt fry around this time of year and runs a raffle drawing during Rushford Days; they use this money for senior scholarships. This year they will not be having the smelt fry due to the pandemic.

The VFW currently has 33 members, most of whom served in Vietnam; Tom Butterfield was in the Gulf War. Butterfield, Tudahl, and LaFleur all agreed that the younger vets were not joining as much as vets had in the past.They felt this was due to the “endless things to do these days,” according to Tudahl.

Knowing that young vets don’t want to waste any of their spare time, the VFW keeps their monthly meetings short and to the point. The fact that the VFW no longer has a club, a designated building may affect membership numbers, but the current members question whether the community would be able to support another bar and grill. Currently a lot of the VFW members are also members of the American Legion. The VFW usually meets at the Legion when the Legion is open.

When asked what they get out of being in the VFW, the men noted the recognition of having served their country in a wartime in another nation. In order to be a member, a serviceman or servicewoman needs to have served during a foreign war or to have received an expeditionary medal for an undeclared war, receiving combat pay (imminent danger pay). When the VFW marches in a parade, they are recognized by the public for that service. LaFleur pointed out that young vets should join so they are included in the counts when vets lobby legislatures to continue to fund

health care benefits for veterans. Vets are entitled at this time to free military funerals and military burial at Preston; spouses can also be buried there.

With a little prompting, both Tudahl and LaFleur shared some of their experiences in the service. Tudahl told of serving on an aircraft carrier in communications at Pearl Harbor, Japan, the Philippines, and off the coast of Vietnam. Serving on the USS Keasarge, Tudahl was involved in going to Midway to pick up Astronaut Gordon Cooper after a space flight.

LaFleur actually received a draft letter while still in high school. He was allowed to finish school. While still in high school, he signed up to attend Winona VoTech, thus giving him one more year at home. Once he finished his auto body course, he had his dad drive him to La Crosse, Wis., to enlist. When he got home that day, his mom handed him his draft letter. By enlisting, LaFleur was able to choose not to join the Marines. LaFleur ended up driving dozers and clearing land in combat areas in Vietnam.

Take the time to visit with the members of the VFW and extend your congratulations to the VFW members on the diamond jubilee of the Rushford organization. The members deserve our respect and recognition; they have much to share with us all.