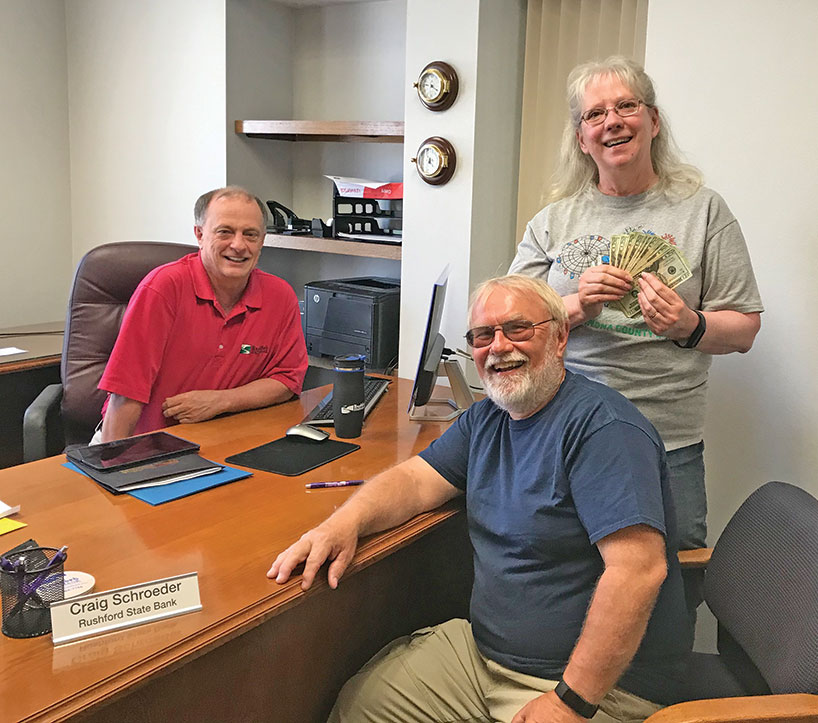 Familiar faces will greet customers at the teller stations. Anna Sweet, originally from Houston, has moved back to Houston. Sweet, who had been working at a grocery store in Onalaska, found her new job a good fit for her; after receiving her accounting degree from UWL, she had been looking for a job in her field.

Karen Gerdes was a teller at Houston’s Bremer Bank before they closed. With four children, she was not interested in driving to work at other Bremer locations. Her first day working for Rushford State Bank was April 25.

When Mike Markegard, the first customer in the newly opened bank, walked in, he asked the tellers, “Do you have any money yet?” The tellers assured him they did indeed have money and Gerdes quickly helped him with his banking needs.

Ann Markegard, Mike’s wife, popped her head into Craig Schroeder’s office exclaiming, “It’s pretty strange to see you here!” Ann said she was ecstatic — “this is beyond wonderful” — to have a local bank in Houston open again. She shared that she had actually had both tellers as students at Houston School!

Craig Schroeder, a longtime banker in the area, had worked at Houston’s Fortress Bank, then worked at Caledonia’s Merchants Bank for 15 years, and at Rushford State Bank for the last nine years.

Schroeder is a senior lender at the bank and will be splitting his time between the Rushford and Houston bank locations. He was quick to point out that a lender will be available at all times and the banks will be offering full service at both locations.

According to Schroeder, the bank has already opened a lot of accounts. He credited this to the meet and greets that had been held in Houston, including a recent event at the Legion featuring music by Trouble Shooter.

Rushford State Bank currently has “real attractive rates on loan products,” Schroeder offered. “State Bank has a lot of flexibility on loans,’’ he emphasized. The bank is able to make local decisions rather than having to forward applications to a far off larger bank, thus streamlining the loan process. Rushford State Bank does a lot of customer visits; they have found that sometimes people are more comfortable at home.

Rushford State Bank compliance officer and internal auditor, Denise Schaffer explained that the managers will be rotating on a schedule as they adjust to the ebb and flow of customers and their needs.

Rushford State Bank owners, Jim and Michele Roberton, shared that the focus of the bank the past three weeks has been on the business of getting the bank open and operating.

Jim Roberton exclaimed, “We’re ready to go! Come on down!”  He commented that there were a few cosmetic details to finish, including replacing the large outdoor signage and the labeling on the bank vault. They intend to wrap the ATM as well as some office windows with the Rushford State Bank logo.

Rushford State Bank is ready and open for all your banking business; they encourage you to come down, visit them, and take care of your banking!