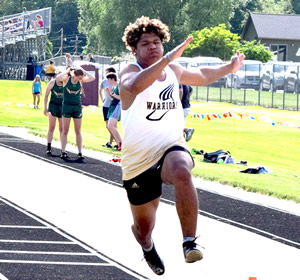 There are four sub-sections in Section 1A. The top six places earn team points and medals.

C/SG had three of the top six 100M sprinters with sophomore Hunter Holland placing fifth. He also ran fifth at 200 meters and qualified for section on the 4x100M relay along with Bjerke, Banse and sophomore Eric Mauss, who posted their best time of the season (45.59 seconds). The third-place 4x200M relay also advances to section with legs run by eighth grader Wait, freshman Jason Schock, freshman Lewis Doyle and senior Mitchell Reynolds.

Pieper, who had his sophomore season canceled by COVID-19, returns to section as a junior in both high jump and long jump as he did two years ago as a freshman. He cleared 6-feet, 1 inch to win the 2021 sub-section high jump and placed third with a personal-record long jump of 19 feet, 5 inches.

After leaving the track with no assurance, the fourth-place 4x100M relay girls would find out the next day they qualified for section with one of the eighth best times among all four sub-sections. Taking their relay baton to section are eighth grader Aften Myhre, freshman Logan Koepke, sophomore Kloe Jore and senior Eliza Welscher. Also earning team points were Welscher with a fifth place in the 100M and Logan Koepke tasking fifth at 200M.

With only five girls competing, the Warriors entered only four of the 18 events. Scoring team points in three events, the Warrior girls placed sixth out of six teams. A dozen C/SG boys made the trip and earned team points in all 11 events they entered and qualified for section in eight events. The boys finished tied for third among six-teams. Lanesboro/Fillmore Central/Mabel-Canton won the boys team title while the Chatfield girls took home that team trophy.