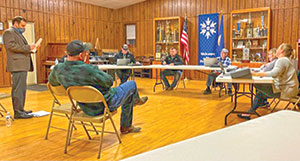 Snow removal was a topic of much discussion during the meeting.  First, the council heard from Terry Stackhouse, who asked, “Is there any way we can take that county snow, push it all up to Main Street, all of it up to the gas station, where the town takes it away?  Because they’re not taking anything from behind Royal’s out.”  Stackhouse and Jeremy Runkle clashed regarding where and how they each plow the snow.   Runkle stated, “You blocked me the other day, and you did it on purpose… and you drove around the pile, you knew it was there.” Mayor Kunert called for an orderly discussion of the issue.  After discussion, a “mutual agreement” was reached, in which Runkle will continue to plow as he has been doing, and Stackhouse will be allowed to pile snow up over the barricade when needed.

Later, Brincks brought up an item listed on the meeting agenda as “Request from resident to have abandoned sidewalks cleaned.”  She explained that a local resident who often goes out walking has requested that the city consider clearing snow from sidewalks of abandoned properties in town, so that walkers do not have to walk in the street at those points.

Jeremy Runkle (city maintenance) stated, “On a four-inch snow, it takes me about eight hours to do… That’s what I do right now.”  So, he explained that if the council asks him to clear snow from abandoned properties, this would add to the amount of hours he spends on snow removal.   DJ Start stated his concern about the “economic feasibility” of the request, and said he doesn’t feel it’s the city’s duty to clear that snow.

Stephanie Start referred to the city’s new snow removal ordinance (which became effective January 1, 2020) that states that all private and commercial property owners are responsible for removing snow promptly.  Individual homeowners who are physically unable to comply with the ordinance may ask the city for an exemption.

The council also discussed that the ordinance allows the city to impose a civil penalty of $50 or $100 (depending on the length of sidewalk) to property owners who do not comply.  The ordinance also gives the city the right to remove snow from noncompliant properties, and to bill the owners for this.  The consensus among the council was not to begin removing such snow on a regular basis.  Mayor Kunert summarized, “I don’t want to see Jeremy out there having to do their sidewalks because they don’t want to do it.”  Letters will be sent to property owners as needed, encouraging them to comply.

The council heard a summary report on Ostrander’s recent annual financial audit, given by Andrew Forliti, representing the Smith Schafer & Association agency.  Forliti’s report included that the audit resulted in an overall unmodified “clean” opinion for 2020.  He went through various graphs showing the city’s trends and current status regarding a variety of funds, reserves, and revenues & expenses.

Fire Chief Jason Rice informed the council that it was recently discovered that all 15 of the department’s air tanks are expired, which means they can no longer be refilled.  He said the department will need to order new tanks, at a cost of $814 each, but really only needs 10 air tanks.  The council agreed to ask the Rural Fire Board to consider covering half the cost.  Dan Hellerud asked what is the expected life span of these tanks, and Rice said 15 years.

The council’s next regular meeting will be Tuesday, April 6, at 6:30 p.m., in the community center.  The public is welcome at all meetings, other than special closed meetings.  In response to a citizen request, council meeting minutes will be posted at the post office following meetings.