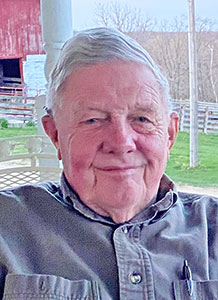 Norlin was born July 4, 1935, on the family farm near Eitzen, Minn.  He went to primary school in a one-room schoolhouse not far from the farm, and later graduated from New Albin High School.  He attended the University of Minnesota, receiving a Bachelors degree in Agriculture Education in 1958.  After a brief teaching job, he was drafted into the army where he served as a personnel clerk from 1959-61. Upon return from the Army, Norlin worked as a County Agent in Redwood County, Minn.  In 1966, he met Sharon Micke at the Minnesota State Fair.  They married on September 16, 1967, in Gilman, Wis.   The day after the wedding, Norlin and Sharon moved to Fargo, N. Dak., where Norlin attended graduate school and received a Masters in Agricultural Economics from North Dakota State University in 1968.  Following graduation, Norlin and Sharon moved to Roseville, Minn., where Norlin attended the University of Minnesota, earning a PhD in Agricultural Economics in 1974.

The family moved to Columbia, Mo., in 1974 where Norlin worked for the next 25 years for the University of Missouri-Columbia in the College of Agriculture.  Norlin worked as a State Extension Economist in Farm Management, pioneering support and promotion of computers in agriculture and the family farm.  Some of his initiatives included, “Returning to the Farm,” “Feminine Farrowing School,” and “Computers on the Farm.”  From 1994-1999 Norlin served as an Associate Dean in the College of Agriculture. Upon retirement, Norlin was honored with Associate Dean Emeritus and Professor Emeritus of Agricultural Economics.

In 1999, Norlin and Sharon retired and moved back to the Hein family farm near Eitzen, Minn. Norlin enjoyed retirement restoring and updating the 1907 farmhouse he was born in, maintaining the farm buildings and providing support for the land to be farmed. Norlin enjoyed the active lifestyle of living on the farm; fixing fences, spraying pastures, cutting wood, and managing timber.  Norlin enjoyed giving tours of the farm and valley and sharing his family history. Norlin and his son Kevin collected Allis Chalmers tractors and enjoyed sharing the collection in the Eitzen 4th of July parade each year and joining rural tractor rides with friends. Norlin also enjoyed spending time in his shop working on wood projects for his grandchildren. Entertaining and cocktail hour on the front porch, with a view of the Winnebago Valley, was one of Norlin’s favorite ways to spend time with family and friends. Grandchildren will report that the best cherry cocktail was served by Grandpa Norlin. Norlin was also a member of the Eitzen Lions Club.

Norlin was a lifetime learner and world traveler. He and Sharon enjoyed taking trips and cruises all over the world. He loved working with the latest technology and always had a new project lined up. Norlin’s conversations and curiosities will be missed by all who had the pleasure to know him. Norlin’s warm, cheery and welcoming smile will forever be remembered.

Visitation will be held 10-11 a.m. on Wednesday, June 2 at St. Mary’s Catholic Church, Caledonia, Minn. Christian Burial Mass 11 a.m.  Burial will follow at St. John’s Wheatland Cemetery.  A funeral meal and fellowship will be at Eitzen Community Center at 1 p.m.