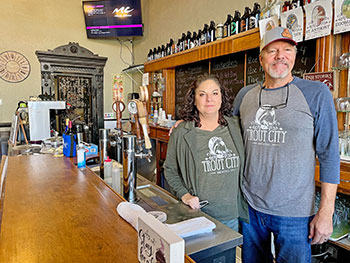 Craig and Vickie Hildestad already love the Preston community. Those sayings about Minnesota Nice? Vickie says they are so true. And that’s a good thing. The Hildestad’s recently kicked off their retirement in southeast Minnesota after living and working in the Jacksonville area for 30 years. But they are not sitting still. Craig and Vickie are the new owners of Trout City Brewing in Preston and are in the beginning stages of taking the two-year-old brew pub to the next level.

Craig and Vickie’s path to settling in Preston wasn’t immediately clear. When retirement came on the horizon after Craig’s long career at Mayo Clinic in Florida and Vickie’s tenure at Baptist Health, the couple initially sought to relocate to the mountain regions of Georgia to escape Florida’s hot summers and Minnesota’s cold winters. They dabbled with the idea to start a food truck business, with Vickie just having joined culinary school to harness her passion for cooking. But those plans became too complex, and after realizing that most business ventures in Georgia’s tourist regions were just too expensive, the Hildestad’s set their sights on Stumpy’s Bar & Restaurant which was for sale in Rushford. But that, too, wasn’t the right fit for their dreams. Along came the opportunity to purchase Trout City Brewing.

After a lengthy process to transfer licenses and learn about codes, the Hildestads took ownership of Trout City Brewing, including the upstairs apartment – their new home – on September 30.

Some old, some new

“Early on we decided to keep the name, keep the logo, keep pretty much everything they had established,” Craig says.

The business had already developed a big following, and the Hildestads saw no reason to turn it upside down. Yet, they plan to add their own touches to new food and beverage offerings. For example, while Craig and Vickie continue to brew Trout City’s six established beers – Local Yokel, Easy Rider, St. Anthony, Egomaniac, Stout It Out Loud and Red Sky – they have also introduced seasonal cranberry and lime beers.

“They have been such big hits that we may keep those,” Craig says.

He’s also in the process to begin offering crowlers – a fairly new concept in the beer industry, unlike growlers – which will allow Trout City Brewing to sell smaller, can-like beer containers containing 25.4 ounces of a customer’s favorite brew.

And Vickie is excited to create new food offerings once the new oven and stove arrives.

“We plan to try some new things, like Mexican Night or Italian Night, and I would like to start brunch on Sundays,” Vickie says.

They also plan to source much of their food locally.

Big plans are on tap for the beer hall, which is located in a separate but connected building next door across what was once an alley. The hall can seat up to 60 guests (with additional seating on the adjacent patio), and the Hildestads would like to see it used for events and other special activities. For example, they have already partnered with JEM movie theater in Harmony and plan to show family-friendly movies in the hall.

“We really want everyone to know that we are a family-oriented business. Fifty percent of our business is food,” Craig says.

The Hildestads are also looking forward to other joint ventures, such as a Christmas ornament decorating class in partnership with Urban Artifacts, which is another business in town. And speaking of the holiday season, Trout City Brewing plans to invite the community to help decorate a Christmas tree in the pub.

While Vickie’s father-in-law is currently helping to run the brew pub, along with one staff member who stayed on after the transition, the Hildestads are looking for additional help.

Trout City Brewing is currently open on Thursdays, Fridays and Saturdays from 11 a.m. until 8:30 p.m. and on Sundays from 12-5 p.m. Current offerings include beer, hard seltzers, ciders, non-alcoholic beverages, coffee and espresso, as well as snack foods, sandwiches and appetizers.

Customers are encouraged to check the brewery’s Facebook page “Trout City Brewing,” and website, troutcitybrewing.com for updates, as the Hildestads finalize and roll out new offerings.

“We are really excited to be part of the community,” Craig says.