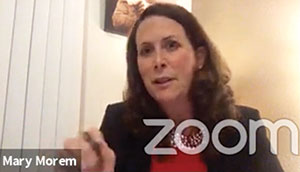 Mary Morem, currently principal at Triton High School, was selected by the Houston School Board as Houston’s new superintendent at their regular board meeting and final superintendent interview session April 15, 2021. Morem will replace current superintendent Krin Abraham when she retires in June.

In her interview, Morem pointed out that she has been very involved in providing innovative technology and professional development in the area. She has also worked to form community partnerships with local businesses and colleges and is an active member of HVED. She has connections with local colleges and knows all the administrators in the area. Morem has been supervising eight student teachers as well as mentoring four people working toward their administrative certification. In addition, she works with Equity Alliance in Rochester.

Morem creates collaborative groups with students, giving the example that she and a group of students helped build the R-P playground as well as the city playground in Houston.

She emphasizes communication with staff by having weekly meetings in which measurable goals are set by the group. Morem added that she has taken on additional roles if there was a budgetary issue.

Morem is very familiar with SPED and gave examples of unique trends in SPED such as the social emotional needs (anxiety). She has worked with colleges to provide additional support in the regular ed classroom by adding SPED teachers and student SPED teachers as well as a regular ed student teachers. In that way, much more one-on-one support was available. At Triton, she worked to hire a behavior specialist and worked to help students with dyslexia.

Five years ago, Morem worked to help build a network with businesses, putting together policy and finding out the needs of local businesses and interests of students. She goes to meet business leaders face-to-face, working with the Chamber of Commerce. Businesses are invited to the schools to help celebrate successes. Morem has spoken at businesses and helped them with team building.

The board felt that Morem was a very good, thorough, communicator, quick to answer and very fluent. They felt that she would be able to “hit the ground running,” since she was familiar with the area schools and colleges and well-experienced in SPED as well as strategic planning. Although Morem lacks experience as a superintendent and with the online school, the board felt she would soon learn with the help of knowledgeable staff such as Gwen Rostand, director of finance and the MNVA principal Angela Specketer and staff. MSBA representatives recommended that Krin Abraham could possibly help Morem as a consultant at the beginning of the year to aid in transition.

Other finalists interviewed included Kevin Babcock, principal at Medford Public School. The board had found him to be good with relationships, a “hands-on guy” who was an active communicator. He was very knowledgeable about technology and had been involved as two of the districts he worked with moved to one-on-one devices. Babcock had developed an online biology course at Rasmussen College. He and his wife had started a beautification program in Janesville, and he likes to join community clubs and organizations so he can be involved with the community.

Stephanie Hubbard, superintendent of Iowa-Grant School, rounded out the finalist list. The board appreciated her experience as a superintendent as well as in SPED. Hubbard was director of SPED in Bemidji and most of her teaching experience was in SPED K-12. Her current district has just switched to Apptegy, the same website creator as Houston has chosen. The board was impressed with her passion and enthusiasm as well as her detailed plans for the future and the way she empowered her staff.

At the close of the 5½ hour session, the board, after discussion and checking shareholder opinions, unanimously chose Mary Morem as the new Houston superintendent and contacted her with the decision.

Before conducting the superintendent finalist interviews, the board conducted a regular meeting in which they:

• Learned COVID numbers were staying down, perhaps because there is less testing currently.

• Accepted the $37,850 bid from Custom Alarm for an update to the camera system.

• Agreed to a lease of the high school ball fields to the city.

A special school board meeting will be held April 22 at 5 p.m. via Zoom to approve the new superintendent contract with Mary Morem. The next regular Houston School Board meeting will be May 6 at 6 p.m. in the high school library. Meetings will also be streamed with the link available on the school’s web page. The public is welcome to attend.