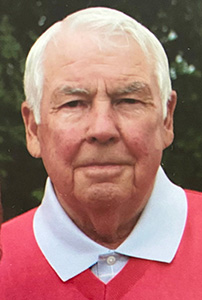 Neil A. Soltow died on Saturday, June 5, 2021.  Neil was 88 years old, and had moved to the nursing home from assisted living in the Eastern Star Barthell complex in Decorah, Iowa.  He had been in hospice for the last three weeks.  A graveside service with immediate family, will be held in the near future.

Neil was born August 21, 1932, in Kendallville, Iowa, to Paul and Lois Soltow.  Neil lived in the Canton and Mabel area and graduated from Mabel High School.  He worked in the feed and grain business throughout his career. He enjoyed working in his yard and entertaining friends in his backyard, loved playing golf, and was a loyal supporter of Minnesota sports, especially the Minnesota Vikings.  He was a member of Mabel First Lutheran Church.  Neil and his beloved wife Arleen raised their family in the Mabel area.

Neil was preceded in death by his wife Arleen D. Soltow and son Scott.  Arleen passed on April 4, 2020.  She married Neil A. Soltow in 1951.  As a couple, Neil and Arleen loved their active life in the Mabel area and their many friends and activities. Arleen especially enjoyed working with Greg Wennes radio stations, for over 35 years, serving her valued customers and friends, and hosting a regular radio show.

Neil’s family sends warm thanks for the many calls Neil received throughout the COVID period and his last weeks in the nursing home.  The exceptional and loving care from Pastor Malm, the staff at Eastern Star Nursing Home, and the hospice care givers, helped make Neil’s final weeks comfortable and filled with love.