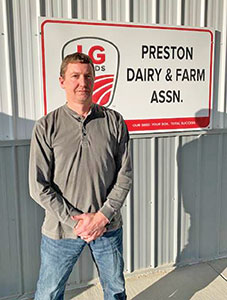 Nathan (Nate) Honsey took over the helm as the new general manager at the Preston Dairy and Farm Association on September 28, 2020.

The Association has been in business since 1979 and currently has 16 employees and two locations – Preston and Canton. The independent farmer’s co-op governed by a board of directors is a full agronomy service providing farmers with seed for crops, animal feed, liquid and solid fertilizer for crops, and chemicals applied to crops for weed and pest control.

Honsey grew up 10 miles north of Lanesboro and graduated from Peterson High School in 1990. After high school, he completed the agricultural business program at Western Wisconsin Technical College (WWTC) in La Crosse. He shared, “I have been working in the agricultural industry and farming ever since.”

Honsey is new to Preston Dairy and Farm Association. He spent 22 years at Farmers Co-op elevator in Houston and Rushford. Over the last two years, Honsey worked for Midwestern BioAg as general manager for Minnesota and South Dakota.

Honsey has been married to his wife Jessica Honsey for 10 years. The couple has five children from 16 to 28 years old. There are four boys and one girl: Kyle, Devin, Chelsey, Taige, and Kail. They also have one grandson, Aaden.

When not at the office, Honsey spends time in the outdoors with his wife Jess. Both are avid sportsmen. The couple enjoys hunting whitetails and turkeys on their property when they have time. They also head to the North Woods for bear hunting. They also enjoy camping, ice fishing, and open water fishing. Honsey mentioned that he enjoys working on the equipment in his shop.

What do you plan on accomplishing within your first 90 days on the job? He explained that he would get to know the growers/patrons of the Preston Dairy and Farm Association. Honsey also plans on looking for ways to improve efficiency in the Association’s day-to-day operations and identify ways to serve the area’s growers better.

What would you like the community to know about yourself? “I grew up in the area working on the family farm. We moved to the home farm in 2005 and have been running it ever since.”