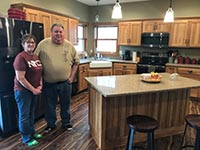 Mike and Susie Munroe have finally moved into their new home, located on a gravel road a couple of miles northeast of Canton.  And although there are still a few items to be finished at their new home (mostly landscaping and other outside work), Mike and Susie said they definitely feel good about how the project has gone, and they are very pleased with their decision to do things “right,” rather than “fast” or “cheap.”

Mike and Susie gave high praise to the various contractors involved in building their home.  Susie stated that Tollefson Construction was the builder, and Mike mentioned a number of other businesses and contractors involved, including Mabel Lumber, Gjere Construction (excavating and concrete work), Morem Electric, TLC Excavating (septic and water), Canton Plumbing & Heating, Case Drywall, King Insulation, Rockweiler’s (appliances), Johanningmeier Stone (countertops), and WT Lighting.  Mike added that as the home was being built, if small issues arose that required changes to the blueprint, the contractors were quick to find solutions and offer the Munroe’s options on how they wanted things to look.

Since the Munroes had been living in Mabel, they didn’t have a firm date when they needed to move out of their old home and into the new home, which took a lot of time pressure off the process.  Mike explained, “It was kind of handy living in town, two blocks from the school… but now it’s time for some quiet… It’s a nice area, good neighbors.”

One of their new neighbors is Susie’s father, who lives just across the gravel road, and that proved advantageous, as Susie explained that they chose to share a well rather than drilling a new well. Mike also told the story of how the couple came to own the property on which they have now built.

Mike explained that about 14 years ago, “I saw the sale bill up on this piece of property… I went to the guy that had it listed and I asked, ‘Is that 11 acres buildable?’ and he said, ‘It is, but it’s only buildable for one person.  You’re the only person that could probably buy that and build on it because your father-in-law has a feedlot permit which doesn’t allow for building close to his [property].  So all you gotta do is have him sign a waiver.’”  Mike said he bought the 11 acres and got the waiver signed, but the actual building process didn’t begin until June of 2019.

On the home’s main floor, the living room area includes a beautiful “windmill-style” ceiling fan, with a very open floor plan into the kitchen.  Also on the main floor, there is a master bedroom, laundry room, and large walk-in closet.  The Munroes also have a small office area that could be turned into another small bedroom if needed.

Susie pointed out that she really wanted to have some “barn-style” doors in their home, and she proudly showed off several such doors that were installed in the basement.  Their basement includes two guest bedrooms, as well as a spacious “man cave” or bar area, with a walk-out door leading to the back yard.

Mike proudly showed the three-car garage, which includes in-floor heat (as does the house).  He said the in-floor heat and ceiling fan/ventilation system will keep the garage warm and dry throughout all four seasons.

Although the Munroes are now mostly moved into their new home, they said there is still some outside work to be done.  When ground conditions allow, the couple will be doing further landscaping, including finishing their large deck, and installing shrubbery and hostas.  Although this is all dependent on the spring thaw and rainfall pattern, Mike said his goal is to have everything done by mid-summer, adding, “I hope to be mowing grass by July 1.”

Susie has worked at Mabel-Canton Schools for 23 years, and is a Title One teacher, teaching reading and math to K-6 grade students.  Mike has worked for Valley Transportation (Grand Meadow) for 20 years, and enjoys his sales job there.  Neither Mike nor Susie have any plans to retire in the foreseeable future, but they are glad to have a home built the way they want it for the rest of their lives.

When asked what advice they would give anyone considering having a home built or remodeled, the Munroes recommend careful planning and using trusted contractors.  Mike explained, “You’re going to get bids and quotes from people.  And the cheapest isn’t always the best way to go.”  Susie concurred, saying that when it comes to building a home, a person should not cut corners, adding, “It’s a once-in-a-lifetime thing.”