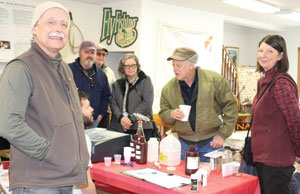 Minnesota Well Owners Organization (MnWOO) is a new private well advocacy group working out of Rochester. The organization’s goal is to build awareness among well owners so everyone can have safe water to drink. “You do not know that your water is safe,” says Jeff Broberg, licensed geologist and MnWOO director, “until you test it. Private well owners don’t test nearly enough.” Broberg’s organization will do six free water testing clinics in 2019, the first of which was February 16 in Preston, in coordination with the National Trout Center and with assistance by the Fillmore County Soil and Water Conservation District (SWCD). Sixty-two people came to the free clinic. Seventy-eight water samples were tested from 55 wells, four springs, and 19 streams in more than 10 communities. Some results were comforting, others disquieting.

We live in a sensitive area for water,” says Broberg. “In glaciated areas like Austin, Ostrander, Grand Meadow… their wells have always been clean. Because of the glaciers they have 100-300 feet of clay on top of the rocks. Surface water doesn’t infiltrate that far. For karst country, it’s a different situation. We see contamination getting worse every year.”

Nitrates in water are measured in parts per million (ppm). When over 10 ppm the water isn’t safe.  Nitrates restrict oxygen transport in the bloodstream. This is dangerous for humans, livestock, and wildlife, especially infants (causing Blue Baby Syndrome) and pregnant women. In addition, there is evidence that ingesting nitrates can lead to cancer. High levels of nitrates in water also indicate that other contaminants are present. Broberg says “nitrate levels of 3 ppm indicate a 96% possibility that six or more pesticides are also in your water!” From the Preston clinic we learned that 23 wells (42%) had under 1 ppm nitrates. “These well owners should be grateful for pristine water,” says Broberg. Another 23 wells tested 3ppm to 15ppm. “This is worrisome and it’s not likely to improve.”

The Minnesota Department of Agriculture (MDA) conducts research through the Township Testing Program to identify places vulnerable to groundwater contamination.  A study was done in 2017 for Fillmore County that revealed some serious problems. For instance, of 128 wells tested in Rushford Village, only 3.1% had nitrates greater than 10 ppm; of 54 wells in Preston, 7.4% were above safe levels; of 42 wells in Harmony, 28.6% tested high, and a whopping 38.6% of 44 wells in Preble Township were unsafe. Results for your township are at https://www.mda.state.mn.us, search for and then select Township Testing Program, scroll down to 2018 Initial Results, and select the Fillmore County PDF.

Broberg laments that there is not enough good information and too much misinformation. “Many people are afraid that if they’re aware of a problem, they’ll have to do something about it. But taking action or not is solely up to the homeowner and there are multiple options for healthy solutions,” he explains. “You could drink bottled water. If you drank bottled water your whole life it would cost you only about $3,000!” The director’s personal well tested over 15 ppm nitrates on Saturday. His solution? Fill bottles from a friend’s tap. “If you want to drink your own water and have a contaminated well, the only way to do it safely is to install a reverse osmosis (RO) system,” says Broberg. Carbon filters will NOT remove the contaminants, nor will boiling the water.

Broberg cites a 2017 Wisconsin survey where 2/3 of participants’ wells were contaminated. One third of those who had a bad test said they would do nothing about it. They pay for that decision with their health. Of the remaining two thirds, one third of them put in the wrong kind of equipment to resolve the issue. They invested in solutions that did not solve the problem. “When well owners have a lack of good information, that’s when it gets expensive,” says Broberg.

MnWOO was established to raise awareness, to support individuals and communities working to protect drinking water, to provide good resources, to suggest alternatives, and to give well owners access to accurate information, all free of charge. They’re able to do this through generous gifts from individuals and grants. With the help of a Rochester Area Foundation (RAF) grant, MnWOO has the funding to conduct six water testing clinics along the Highway 52 corridor in Fillmore, Olmsted, and Goodhue Counties in 2019. Watch for upcoming clinics (two more in Fillmore County) this summer.  All you need to do is find a clean container and bring one cup of water.

Broberg hopes to test and document water quality throughout the state. “There are 472,000 private wells in Minnesota,” he explains, “1.2 million people, one quarter of the population, rely on private wells. People just don’t know enough about their drinking water. MnWOO aims to remedy that. “Knowledge is power!” 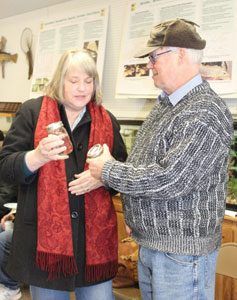 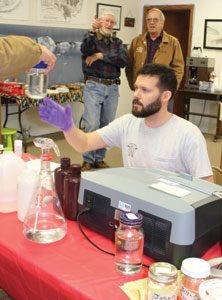 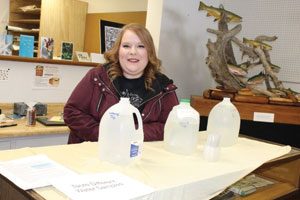