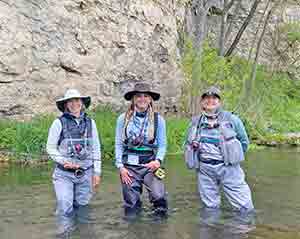 Ron Schara and his black labrador retriever, Raven have been a staple on the Minnesota television airwaves since 1995.  His show, Minnesota Bound, has showcased many of the favorite outdoor pastimes and destinations of the state, sharing them with its many fans. Recently, Ron’s daughter, Laura Schara, visited the Preston area to film an episode featuring fly fishing in the driftless area.

Although he doesn’t remember doing it now, at some point in the last few years, Melvin Hayner, owner of The Driftless Fly Fishing Company in Preston sent Ron Schara some information on fly fishing in the Preston area. It must have piqued Ron’s interest because several months ago, Laura contacted the shop and asked about booking a guided fly fishing trip with Melvin’s sister, Monta, for an episode of Minnesota Bound.

Monta has been a guide with The Driftless Fly Fishing Company for about three years now. Her history with fly fishing goes back further than that though. She began the sport about 30 years ago and has been teaching it through Flyfishing Women of Minnesota since 2015 and also mentoring women and children through the DNR Fly Fishing Program. In addition to guiding, she also teaches preschool in Minneapolis where she lives with her husband. Her schedule of working three days a week with summers off allows her to travel to Preston frequently for her second job at The Driftless Fly Fishing Company. “Despite the fact that I live in Minneapolis, I love the (Preston) area,” she said, adding that she wouldn’t mind moving here if she ever gets the opportunity. She has spent a lot of time exploring and enjoying the Preston area and especially likes that trout fishing is so accessible right in town.

Monta believes that the reason why Minnesota Bound specifically asked for her as a fly fishing guide was to show that it’s not just a men’s sport. “I think it tied into how so many more women are fly fishing now,” she explained. “It’s really important to get images of women fly fishing out there.” When she first started with the sport, women only made up about 20% of fly anglers. “It has greatly increased since then, but we are nowhere near 50% yet,” Monta said. A 2018 report from the Recreational Boating & Fishing Foundation found that of the 6.5 million people who fly-fish in the U.S., only 31% are women. Orvis, a fly fishing company that endorses The Driftless Fly Fishing Company in Preston, has a 50/50 On the Water campaign to inspire and support women who are interested in the sport. Monta has participated in the campaign by holding women-specific classes and events at the shop.

On May 7, 2021, Laura Schara arrived in Preston to film the Minnesota Bound episode with a friend and a camera man/photographer. They spent some time filming at The Driftless Fly Fishing Company and also got some shots of the National Trout Center and Trout City Brewing on St. Anthony Street in Preston. Laura was interested to learn more about the unique features of the “Driftless Area.” “She wanted me to talk about the geology of it and the beautiful cliffs,” Monta said.

Of course, a lot of the time that day was spent at the Root River with Monta acting as guide and even giving Laura and her friend a lesson on casting. “It was interesting,” she said. “I would definitely do it again if I had the opportunity.”

When she heard that Minnesota Bound was planning to film in Preston, EDA and Tourism Director Gabby Kinneberg was thrilled. “I have watched the show for several years and to be featured on Minnesota Bound is beyond exciting,” she said. “The exposure it provides for Preston and the Driftless Fly Fishing Company is worth so much. We are thankful that Mel (Hayner) took a chance on opening a business in Preston and we’re excited to see what new visitors this may bring to the area!”

Minnesota Bound works to promote different areas of the state and it’s certainly exciting to see Preston being featured although the episode won’t actually air until the spring of 2022. However, anyone interested in a “sneak peek” of sorts can listen to the podcast that Monta recorded with Laura which has been released at talknorth.com/mnbound. Monta will also be teaching a free Women Only Orvis 101 or beginners class at The Driftless Fly Fishing Shop on June 19. Call (507) 765-4915 to sign up.