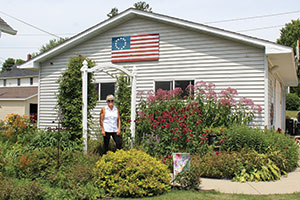 Chuck and Vonnie Aug have lived in their big white house in Preston for 39 years, but it wasn’t until they tore down the old garage to build a new one 26 years ago, that Vonnie got into landscaping. Once the garage came down and she saw the bare dirt, she figured that she needed to either pay someone to take care of it or learn to garden herself. She had never really done any gardening before except for a vegetable garden during her 4-H years, so she asked one of her high school friends to help her plant perennials, and she’s been hooked ever since. Over the years, she’s added and changed things in her yard and now has a beautiful retreat right outside her door.

The low maintenance nature of perennials appealed to Vonnie so she decided to stick with them for her landscaping. “I like perennials because they can take care of themselves,” she laughed. With her demanding job as a nurse at Mayo Clinic, she felt that was a necessary feature for her landscaping. When she first got started, she didn’t think she should pull anything out since they were flowers, but she quickly came to realize that they still needed some pruning. “Any flower is a weed if you don’t keep it under control,” she explained.

Vonnie was able to plant a variety of flowers and plants so that something is always flowering in her yard, from early spring through the end of fall. Some of the flowers she and Chuck enjoy are bee balm, clematis, Joe Pye Weed, Russian sage, and bleeding hearts. She even has a licorice plant that smells like black licorice when the leaves are rubbed. “I’m open to anything that survives on its own!” she said. Vonnie’s favorite flowers though are the ones that come up early in the spring, poking through the snow, after a long Minnesota winter, such as crocuses, daffodils, and irises.

In addition to the flowers and other plants around her home, Vonnie also has four raised garden beds in the backyard. When her children, Jeremy, Nikki, and Jordan, were young, they helped her raise vegetables in the beds. Now that they’re all grown and on their own, Vonnie uses the space to grow an assortment of flowers and vegetables.

The Augs’ home used to belong to Chuck’s grandfather and featured a big maple tree on the front corner, but when it started to lose branches, the city had to cut it down. Vonnie remembers it being a sad event as it had been there ever since Chuck could remember as a child. When the tree was gone, they wanted to plant another one in the same spot. They considered a fruit tree, but decided that would be too messy so they went with a Japanese Maple and added some landscaping with a stone bench for decoration.

Chuck and Vonnie spend a lot of time outside on their attached gazebo porch or on the patio in the back of the house, depending on the weather. Hanging baskets and a fan to keep the bugs away and create a gentle breeze add a nice touch to make the gazebo even more inviting, while the patio has a perfect view of the backyard garden beds and plants and flowers all around it.

Vonnie spends an hour or two each week deadheading flowers and pulling out weeds. Each spring and fall, she works in the yard for several days straight to make sure everything is growing only where it needs to be and is cleaned up and neat. She doesn’t have any plans to add or change anything at the moment, but is considering the option of planting some perennials along their fence at some point. For now though, she and Chuck will continue to enjoy their beautiful yard just as it is.