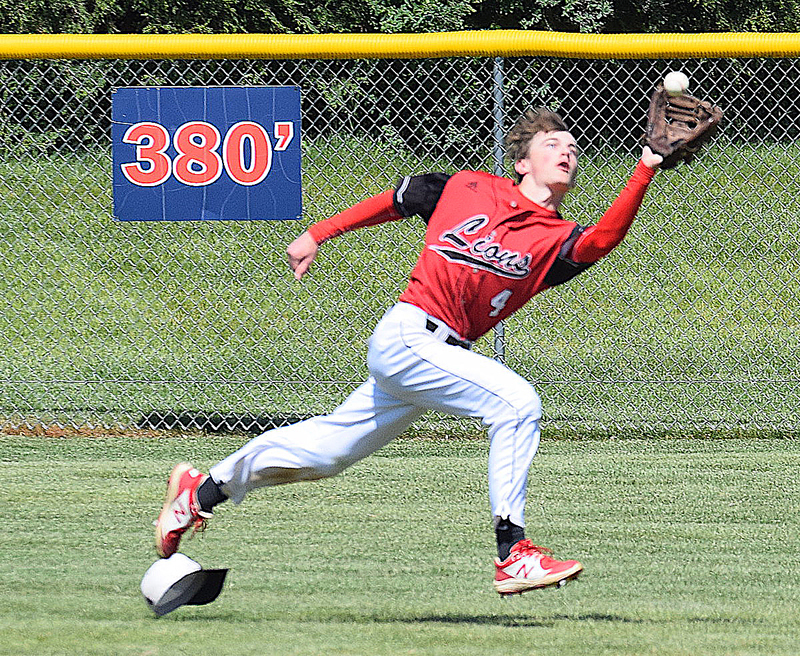 A last-inning, three-run, walk-off rally gave Spring Grove its first lead and a Senior Day, non-conference win against Fillmore Central/Lanesboro, 5-4. Two afternoons after that May 29 thriller, the SEC double header at Adams against Southland was rained out. Twice postponed, they settled for a single, make-up game on Saturday morning, an 11-1, six-inning Senior Day win for the Rebels as both teams closed the regular season. It was 10th time in 18 games Southland had scored double-digit runs. The Rebels (13-5, 11-3 SEC) placed third in the conference race; the Lions (9-10, 8-7 SEC) finished fourth among nine SEC squads.

Southland takes the No. 3 seed into this week’s Section 1A Tournament. In that 15-team field, Spring Grove received the No. 6 seed and a quick home rematch with No. 11 seed Fillmore Central/Lanesboro (3-16). If both the Lions and Rebels win their May 31 section opener, it will be a June 3 quarterfinal rematch in Austin.

The Lions never led until the game ended with a play at the plate as Matthew Doering scored from third base on a ground ball by Jaxon Strinmoen. Spring Grove was down by two runs (4-2) going into the last half-inning. The rally began with back-to-back singles and stolen bases by Nathan Solberg and Caleb Griffin. A Logan Brumm sacrifice fly and wild pitch tied the score. Brandon Jahnke singled and Doering, as his pinch runner, stole second base and went to third on a passed ball.

“Jaxon was able to put one in play so we could beat the throw home for the win,” said coach Chris Strinmoen. “We talked about the importance of getting on base to give ourselves a chance. That’s exactly what Nathan and Caleb did to get things going.”

FC/L had scored four unearned runs in the first inning and did not get a runner in scoring position again until the top of the final seventh inning. On Senior Day, senior hurler Isaac Griffin ended that first-inning frustration by picking off a runner at first base and then went the distance, striking out seven and walking none while allowing only five base hits (three in the first inning). Those seven strikeouts moved him up into fourth place on the single-season strikeout chart with 108. The pitching decision was his seventh win of the season (7-1) which ties him for fourth place in single-season wins.

“We made a couple big mistakes in the first inning that gave them an early lead,” noted the coach. “But Isaac held them in check the rest of the way, and our bats slowly came to life. We’ve been putting a lot of pressure on teams with runners on base, but we just haven’t been able to get that clutch hit to bring them home.”

Spring Grove cut the deficit in half with two runs in the third inning. It began with Caleb Griffin drawing a walk and featured singles from Jahnke (RBI), Jonah Udstuen and Ezra Griffin (RBI). Then only one Lion reached base (walk) through the next three innings against FC/L starting pitcher Cooper Ferrie, who left the mound after reaching the pitch limit. And then the game-winning, last-inning rally came against a Falcon relief pitcher.

Spring Grove out-hit the visitors 9 to 5, but also left eight runners on base. FC/L stranded only four. After falling behind 4-0 in the first half-inning, the Lions had a runner put out at home plate and then left the bases loaded in the bottom of the inning.

“I thought we showed a lot of heart coming back tonight,” said Coach Strinmoen. “We did what we needed to do in the seventh to get a rally started. A very good team effort in the end and a very important win for us.

“We got some good production from our young eighth graders in the lineup,” he added in praise of Jahnke (third base, 2 for 4), Ezra Griffin (catcher, 2 for 2) and Zach Brumm (centerfield).

It was the teams’ first meeting since two Spring Grove wins in the 2019 playoffs. After a 12-year hiatus in the series, the teams have split their last four games.

SG 1, Southland 11 (6 inn.)
With the wood, the leather and the legs, Isaac Griffin made two outstanding catches in centerfield, batted 2 for 2 with a double and scored the lone Lion run that gave Spring Grove an early 1-0 lead. It may have been the play of the season when first baseman Jaxon Strinmoen made a diving, over-the-shoulder catch while retreating down the right field line. But five of the nine Rebel hits – plus both Lion errors – came during a seven-run second inning, which put the home team on top to stay.
A five-walk fifth frame allowed Southland to add three runs in the fifth, an inning before back-to-back singles ended the game with the 10-run rule. Meanwhile, the Lions had managed only four hits against the Rebels’ leading pitcher Harrison Hanna, who struck out eight and walked only three while reliever James Mullenbach walked one. The Southland defense committed no errors.
“Even though there wasn’t much meaning to the game today (with conference determined and seedings complete),” said Coach Strinmoen, “we wanted to use this time to get ourselves prepared for the playoff push. I felt it was good to get some at-bats and to see some pitchers get some work on the mound.
”But once again, we gave up a big inning partly due to giving the opponent an extra out. If we can just clean up some simple defensive things, I feel like we can make (a) small tournament run. Even though we didn’t score many runs today, we seemed to be getting baserunners in position to score. We just need some clutch hitting to take the pressure off the pitching and defense.”
The Lions stranded eight runners, while the Rebels left five on base.