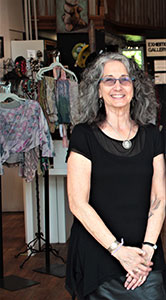 “We’ve been here for 30 odd years, we’re not going away,” Lanesboro Arts Director and Team Executive Director Robbie Brokken said. Brokken shares the title of art director with Kara Maloney who is also the advancement director. Together, with an incredible, hard-working staff and board of directors, they run the Lanesboro Arts Center. Despite the challenges that the center has faced due to COVID-19, they are continuing to remain positive. “It’s a very hard time for non-profits,” Brokken said.

The gallery originally opened as the Cornucopia Art Center in 1993 by a group of about a dozen visual artists from the Lanesboro area. Eventually it moved from being a co-op to a full fledged non-profit organization and then merged with the Lanesboro Art Council in 2009. In September 2014, a resolution was passed by the Lanesboro City Council declaring the entire town of Lanesboro to be an Arts Campus. “That’s been a huge boost to the economy in Lanesboro and the region,” explained Brokken. Since then, Lanesboro has been nationally recognized for its Arts Campus initiative, and the Arts Center has acted as a free consultant for other small towns across the country who are interested in opening an art gallery or becoming an art campus as well.

From the first 12 or so artists who started the Arts Center, the gallery has grown to include work from around 85 local and regional artists ranging from emerging to established artists. Many of the original artists still have their work featured there as well. The artwork at the gallery includes a wide variety of styles including oil, watercolor, and acrylic paintings, photography, jewelry, ceramics, wood, textiles, sculptures, mosaics, mixed media, and more.

In her 17 years as the gallery director, Brokken estimates that over $2 million worth of artwork has been sold, with the majority of the money going directly to the artists. Because of that, some artists have been able to go from creating art as a hobby to a full-time job.

“People tend to think that art galleries are expensive and unapproachable, but we pride ourselves on having something for every budget,” Brokken said. “In our gallery, everything is quality art.” Items for sale at the gallery range from $1.00 up to thousands of dollars and the stock is constantly changing.

Brokken describes the gallery as a friendly, hands-on experience. “We really want people to have a positive art experience there,” she said. She encourages parents to bring their children to the gallery to expose them to the world of art. “It’s not just about selling, but the experience.”

The Lanesboro Arts Center has a lot of irons in the fire and it handles them all well. The artist residency program has been operating since 2001. The center also puts on the annual Art in the Park festival, runs programs at St. Mane Theatre, holds artist opening receptions, operates a lodging space above the center called the Art Loft, hosts a regional high school art show, and more. While COVID-19 has put a damper on many of the events and programs, leading to some of them being held virtually or canceled completely, the center is working hard to find ways to continue serving Lanesboro and the surrounding area. “We’re here to give the locals a quality art experience,” Brokken said.

The Arts Center has been very conscientious about safety since the pandemic began, requiring face masks even before the mask mandate went into effect in Minnesota. Plexiglass dividers have been installed, hand sanitizer is readily available, and the number of people in the gallery at a time is limited. Sales have dropped to about 65% of what they normally are, which is hard on the artists. “This is a really, really difficult time for people in the arts because they’re all self-employed,” Brokken explained. To make the gallery a more accessible experience during this time, an online shop has been added to its website, allowing people to shop from their homes.

Despite the challenges, the Lanesboro Arts Center is powering on and moving forward. “We will absolutely continue to be a presence in the community,” said Brokken.